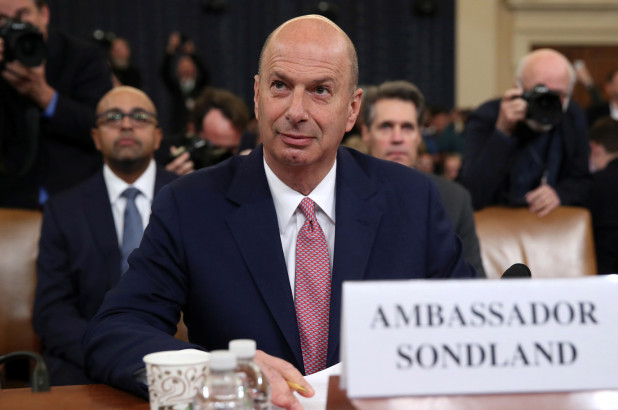 U.S. Ambassador to the European Union Gordon Sondland testified Wednesday that there was a quid pro quo between Ukraine conducting politically motivated investigations and getting a meeting between President Trump and Ukrainian President Volodymyr Zelensky.

Sondland said the connection between these two issues was widely known throughout the administration.

“I know that members of this Committee have frequently framed these complicated issues in the form of a simple question: Was there a ‘quid pro quo?’ As I testified previously, with regard to the requested White House call and White House meeting, the answer is yes,” Sondland said in his opening statement.

Sondland also said U.S. military assistance to Ukraine was withheld and that in "the absence of any credible" reason for the hold on assistance, he emailed Secretary of State Mike Pompeo and asked if Trump and Zelensky should meet to try to break that "logjam." He said Pompeo responded affirmatively.

Sondland in his testimony says that many throughout the Trump administration realized the link between the issues of quid pro quo and the White House visit, delivering a blow to Republicans who have sought to bat down claims there were contingencies placed by Trump for such probes, which are now at the center of the House impeachment inquiry.

“Everyone was in the loop. It was no secret. Everyone was informed view email on July 19, days before the Presidential call," he said. "As I communicated to the team, I told President Zelensky in advance that assurances to 'run a fully transparent investigation' and 'turn over every stone' were necessary in his call with President Trump."

Sondland also makes it clear that he and other officials did not want to work with Trump's personal attorney Rudy Giuliani on Ukraine issues, but did so at the direction of Trump.

"We did not want to work with Mr. Giuliani," Sondland said, referring to himself, former Perry and Kurt Volker, the then-U.S. envoy to Ukraine.

"Simply put, we played the hand we were dealt. We all understood that if we refused to work with Mr. Giuliani, we would lose an important opportunity to cement relations between the United States and Ukraine. So we followed the president's orders."

Sondland testified that he has “no reason to doubt” the accounts of other witnesses who have detailed a July 26 phone call between Sondland and Trump, which took place a day after an infamous White House call Trump made to Ukraine's president where he pushed for investigations of former Vice President Joe Biden and his son Hunter. During the July 26 call, he also raised the matter of “investigations.”

“Other witnesses have recently shared their recollection of overhearing this call. For the most part, I have no reason to doubt their accounts,” Sondland said.

David Holmes, a career State Department official based in Kyiv, had previously described to House investigators how he overheard a phone call in which the president called Sondland to inquire about the subject of investigations, which Giuliani was pushing for at the time.

Holmes said he overheard Sondland tell Trump when he asked about the status of the investigations that “he’s going to do it,” referring to Zelensky. Sondland later said that Trump cared about the “big stuff” when it came to Ukraine, like the "Biden investigation" that Giuliani was pushing, according to Holmes.

“Actually, I would have been more surprised if President Trump had not mentioned investigations, particularly given what we were hearing from Mr. Giuliani about the President’s concerns,” Sondland testified. “However, I have no recollection of discussing Vice President Biden or his son on that call or after the call ended.”

Sondland’s testimony also draws in several top names from the Trump administration, to whom he says he raised the issue of the delayed aid.

“I mentioned to Vice President Pence before the meetings that I had concerns that the delay in aid had become tied to the issue of investigations. I recall mentioning that before the Zelensky meeting,” Sondland testified, referring to meetings that occurred on September 1.

He also mentioned Sen. Ron Johnson (R-Wis.), who he said raised concerns about aid being withheld as leverage for investigations.

While Sondland did not seek to explain why he had to amend his testimony to affirm a quid pro quo --a matter that is at heart of Democrats' concern as to whether the diplomat is credible or not -- he did criticize the White House for refusing to turn over documents that would help him answer the committee’s questions.

But the wealthy hotelier and GOP-mega-donor also offered a defense of his role in the Trump administration’s Ukraine policy.

“I am not a note-taker, nor am I a memo writer. Never have been. My job requires speaking with heads of state and senior government officials every day. Talking with foreign leaders might be memorable to some people. But this is my job. I do it all the time,” he added.

“Any claim that I somehow ‘muscled’ my way into the Ukraine relationship is simply false,” he said, pointing to a series of early engagements he had with Ukraine after being confirmed as ambassador.