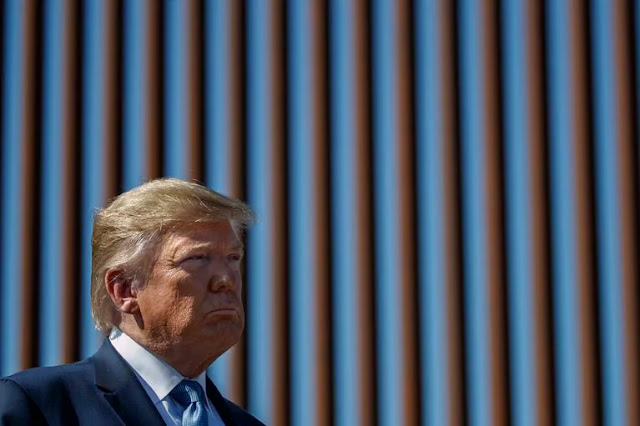 President Donald Trump on Saturday downplayed reports that smugglers were cutting through the new tall sections of wall that he has said are fundamental to security along the U.S.-Mexico border.

Trump told reporters he had not heard the reports when asked about them as he departed the White House on Saturday, but he appeared unsurprised by the news.

"We have a very powerful wall," he said. "But no matter how powerful, you can cut through anything, in all fairness."

The president did not seem concerned about the possibility because "we have a lot of people watching" and "cutting is one thing, but it's easily fixed."

"One of the reasons we did it the way we did it, it's very easily fixed. You put the chunk back in," he said, referring to the steel bollard fencing that the administration decided on after considering several other designs.

Earlier Saturday, The Washington Post reported that Mexican smugglers were repeatedly sawing through the bollards – long, vertical posts made of steel with a concrete center – with cordless saws that can be purchased at most hardware stores. The paper also reported the work could be done in a matter of minutes using diamond grit and tungsten carbide blades.

The Post reported that it was unclear how many times such breaches have occurred. One senior administration official told the Post that it was only "a few instances" and that the new fencing had "significantly increased security and deterrence."

Citing unnamed U.S. agents, as well as current and former administration officials, the Post reported that smugglers were using power tools and makeshift ladders to get past the border barrier, which Trump said in September was "virtually impenetrable" and "cannot be climbed."

"If you think you're going to cut it with a blowtorch, that doesn't work because you hit concrete. And then if think you're going to go through the concrete, that doesn't work because we have very powerful rebar inside," he said while visiting a section of newly built border fencing in San Diego. He called it the "Rolls-Royce version" of a border barrier.

Customs and Border Protection spokesman Matthew Leas later confirmed to CBS News that such breaches were taking place but he said the Post had exaggerated the extent of the problem.

"It's happening but not to the point where it's an issue," Leas told CBS.

In January, NBC News reported that agents were able to saw through a steel slat prototype for Trump's border wall with common tools.

When asked about that report at the time, Trump said the design belonged to the Obama administration though it was built as part of his prototype tests.

"There is nothing that can’t be penetrated, but you fix it," he said.

A Customs and Border Protection report obtained by San Diego public broadcasting station KPBS through a Freedom of Information Act request showed that all eight of the prototypes built for Trump could be breached in one way or another.

CBP spokesman Ralph DeSio told KPBS that they "were not and cannot be designed to be indestructible." He said the idea was to "impede or deny efforts to scale, breach, or dig under such a barrier, giving agents time to respond."

Border Patrol agents and border security experts have consistently said the steel bollard fencing is the most effective design for a border barrier because it is cheaper than many other designs, and it allows agents to see across the border while deterring and slowing those who might try to cross it.

"Any characterization that the wall is not working is ridiculous. The wall is working," Leas told CBS. "Criminals are trying to defeat it and they are going to continue to try new tactics, which we will also defeat."

Though Trump advocated for a "big, beautiful wall" made of concrete – and paid for by Mexico – on the campaign trail in 2016, in January he tweeted that he favored "a Steel Barrier rather than concrete" because it was "both stronger" and "less obtrusive."

Trump's shift was primarily due to the preference of agents on the ground for the steel bollard design.

When he visited newly constructed border fencing in San Diego in September, Trump said he still thought "an all-concrete wall would have been a much less expensive wall to build."

"But from the standpoint of Border Patrol, they were very much opposed to it," he said.

Trump has  said the administration has built new sections of wall along the border, but last month the acting head of CBP, Mark Morgan, said 71 miles of "new" border wall have been constructed to replace existing barriers, CBS News reported.

The administration plans to construct at least 400 miles of new border wall by the end of 2020.