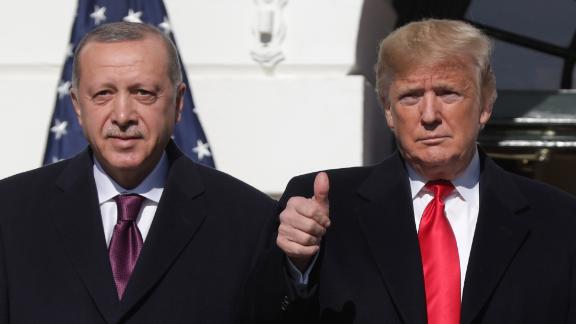 Republican senators said on Thursday that Turkish President Recep Tayyip Erdoğan played a "propaganda" video during a meeting at the White House with President Trump.

Sens. Lindsey Graham (R-S.C.) and Joni Ernst (R-Iowa) both confirmed that Erdoğan showed senators a video during the meeting focused on "terrorist attacks" from the Kurdistan Workers' Party (PKK), a Kurdish group that is designated as a terrorist organization by both Ankara and Washington.

"Well always you wanna watch, and of course the information was presented, it is very heartbreaking but bottom line you have no idea who produced the film, where it's from, what group of people it is," Ernst said.

"So while I appreciate President Erdoğan showing us the information, we don't know the origins, we don't know—and it was very much a propaganda video," Ernst added.

Graham, asked if Erdogan showed them a "propaganda" video, confirmed that he did.

"He showed a video about the history of PKK terrorist attacks ... and what I told him is I'm not here to retry the past. I acknowledge that you have a legitimate national security concern. ... Do you want me to get the Kurds to play a video about what your forces have done? So I was very firm," Graham added.

Graham and Ernst were part of a group of Republican senators who attended the meeting with Erdoğan and Trump on Wednesday. In addition, Sens. Rick Scott (R-Fla.), Ted Cruz (R-Texas) and Foreign Relations Committee Chairman Jim Risch (R-Idaho) attended the meeting.

The meeting follows heightened tensions between Capitol Hill and Turkey, in the wake of Trump's decision to pull back U.S. troops and Turkey's subsequent military invasion against Kurdish-led YPG forces, which Turkey also claims is a terrorist group tied to the PKK. The U.S. does not consider the YPG a terrorist organization, however, and has worked closely with their forces in the fight against the Islamic State in Iraq and Syria (ISIS).

Senators have offered multiple sanctions bills to slap new financial penalties on Ankara over the incursion. The House previously passed its own legislation but sanctions talk stalled in the Senate amid Erdoğan's visit.