Rick Perry says Trump is the 'chosen one' 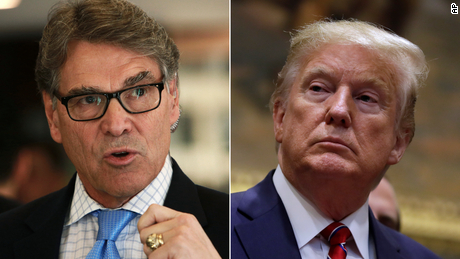 Energy Secretary Rick Perry said in a portion of an interview released by "Fox & Friends" this past weekend that he believes President Trump is the “chosen one.”

“And I actually gave the president a little one-pager on those Old Testament kings about a month ago and I shared it with him,” he continued. “I said, 'Mr. President, I know there are people that say you said you were the chosen one and I said, 'You were.’ "

"I said, 'If you're a believing Christian, you understand God's plan for the people who rule and judge over us on this planet in our government,’ ” he added.

The president got mixed reactions earlier this year when he referred to himself as “the chosen one” in his escalating trade war with China back in August.

“Somebody said this is Trump’s trade war. It’s not my trade war. This is a trade war that should have taken place a long time ago by a lot of other presidents,” Trump said at the time, adding while looking up at the sky: “Somebody had to do it. I am the chosen one."

After the comments generated some backlash, Trump said that he was being sarcastic.

While discussing Perry’s comments during a segment on Sunday, Fox News chief national correspondent Ed Henry said the outgoing Energy secretary also “pointed out to me he believes Barack Obama was sent by God as well, for that moment and that time.”

"He thinks at this moment and this time, Donald Trump was sent by God to do great things,” he continued.

In another portion of the wide-ranging interview released by Fox News over the weekend, Gordon also asked Perry, who plans to resign from his position, about his plans after the White House.

“I want to figure out where you’re going next, but when I [got] into your office and I saw that pillow with Davy Crockett — what’s the saying? You all can go to hell, but I’m going to Texas?” Gordon asks as Perry laughs.

“So, Davy Crockett was elected two times to Congress from Tennessee and [the] third time he got defeated,” Perry said of the late politician. “And he went to Jackson, Tennessee — Lamar Alexander and I were just talking about this a couple days ago — he went to a little courthouse in Jackson, Tennessee, and stood up on the courthouse and said, ‘I sure enjoyed working for you,’ but he said, ‘You all may go to hell, I’m going to Texas.’ ”

“You’re going to do something similar? You going to go to Capitol Hill or the White House?” Gordon asks laughing.

“No, I’m not going to tell anybody to go to hell,” Perry said smiling, adding: “I’ve enjoyed it. It's been an incredible three years of working up here.”