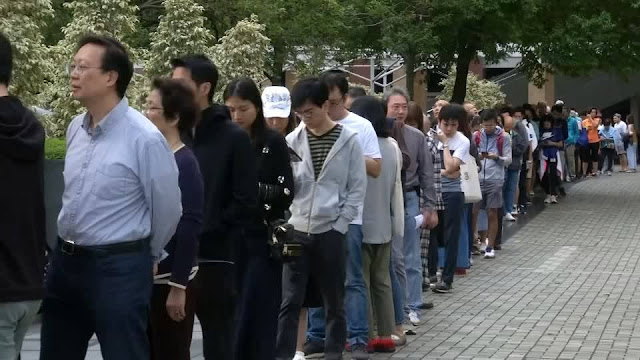 More than 2.6 million people had turned out to the polls as of Sunday evening three hours ahead of the polls closing, a 63 percent turnout rate. It was nearly double the 1.47 million who voted in the last elections four years ago, according to the news service.

Lam, while casting her own ballot, said she was hopeful the elections going off without a hitch were a sign of things to come in the city, which has been gripped by ongoing protests since the summer.

“I hope this kind of stability and calm is not only for today’s election, but to show that everyone does not want Hong Kong to fall into a chaotic situation again,” she said, according to Reuters.

The protests were sparked by Lam’s introduction of a bill that would have allowed the extradition of some criminal suspects to China, but since Lam withdrew the bill, they have continued, with demonstrators calling for direct elections, Lam’s resignation and a formal third-party inquiry into police brutality against protestors.

Candidates who side with the demonstrators stand to gain up to six seats on the city’s Legislative Council and 117 on the panel that selects the chief executive, according to Reuters.

“We don’t know yet, at the end of the day, if the democrats can win a majority,” Jimmy Sham, a candidate for the Civil Human Rights Front, told Reuters. “But I hope our Hong Kong citizens can vote for the future of Hong Kong.”