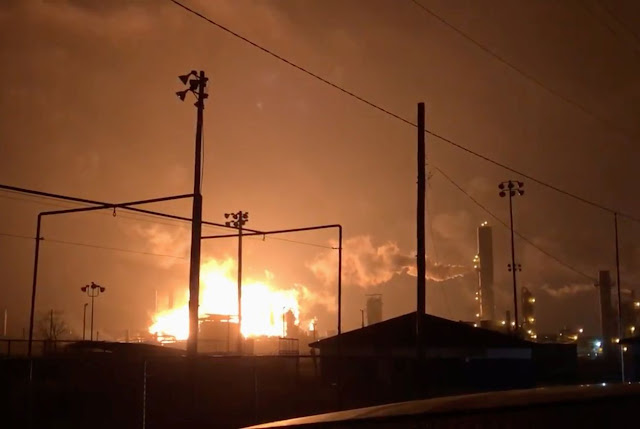 The facility owned by Houston-based Texas Petroleum Chemicals, or TPC Group, which manufactures highly flammable 1,3 butadiene, has been considered a high priority violator by the U.S. Environmental Protection Agency for more than two years, and been out of compliance with federal clean air laws since the agency’s last inspection in August 2017. State data shows the facility has reported spewing more air pollution than allowed by its government-issued permits five times this year, including hundreds of pounds of butadiene.

Though the exact cause of the fire and explosions, which injured several workers and residents, is still unknown, local emergency response officials said it had been traced to a processing unit that produces the colorless gas, which is used to make rubber and plastics and is a known human carcinogen. The first explosion took place around 1 a.m. The second occurred Wednesday afternoon, prompting mandatory evacuations within a four-mile radius of the plant in Port Neches, Groves, Nederland and northern Port Arthur.

Together, the EPA and the Texas Commission on Environmental Quality, the state’s environmental regulatory agency, have fined TPC for air emissions violations more than half a dozen times in the past five years after finding many of the missteps preventable. The last federal censure TPC faced was in 2017 when it was ordered under a consent decree to pay a civil penalty of $72,187, make various equipment upgrades and spend no less than $275,000 on fenceline monitoring for butadiene.

But environmental and consumer advocacy groups on Wednesday said that those penalties — the civil ones add up to less than $200,000 — are nowhere near enough to deter a company that brings in billions of dollars a year from taking sufficient corrective actions.

“When you look at all these facilities and their compliance histories, it’s like a rap sheet,” said Elena Craft, senior director for climate and health at the Environmental Defense Fund. “And of course we see many times these bad actors that continue to have violations and ultimately this can lead to the kind of major disasters like the explosion last night.”

There have been multiple, major fires and explosions at Texas chemical plants in recent years that have resulted in injuries and deaths, particularly in the Houston area. Like with Port Neches, many of the facilities had long histories of repeat violations.

A 2017 investigation by The Texas Tribune found that the TCEQ, which is responsible for administering federal clean air laws, fined fewer than 1% of so-called "emissions events" — when a facility emits more air pollution than is allowed by its permits — in 2016. While most of the releases don't pose imminent threat of fire or explosion, some do.

When the TCEQ did fine companies, those penalties often make up a sliver of revenues and profits — even when the emissions events were potentially catastrophic — and the commission often waives a portion of them if the companies agree to address the underlying issue in a timely manner.

The two fines TCEQ handed down to TPC Group this year were for $13,688 and $7,500, but the agency agreed to defer one-third of the amount.

The EPA, TCEQ and TPC Group didn’t respond to requests for comment.

In an incident update posted to its website Wednesday morning, TPC, which celebrated its 75th birthday this year, said it “sincerely remains focused on protecting the safety of responders and the public and minimizing any impact to the environment.”

In a written statement, Catherine Fraser of Environment Texas said, “Disasters like these are terrifying and unacceptable, and the TCEQ and EPA need to take much tougher enforcement actions and strengthen safety regulations, like the Chemical Disaster Rule, to build safer and healthier communities.”

The Port Neches incident comes a week after the EPA gutted the so-called Chemical Disaster Rule — safety regulations enacted by the Obama administration that strengthened a decades-old EPA program designed to prevent and mitigate chemical disasters.

The rule would have required companies to study ways to avoid incidents by using better technology, engage in regular planning session with first responders, provide more information to first responders and the public about what types of chemicals they store on site — and to do third-party audits and root-cause analyses after incidents or near misses.

As authorities investigate the cause of Wednesday's explosions, it’s difficult to say whether the Port Neches incident could have been prevented if the rule had been in effect. But Heather McTeer Toney, who was a regional administrator for the EPA under the Obama administration, said, “what we can say with all certainty is that rules like this are critical to ensuring that we’re at least aware and are doing everything that we can to prevent these types of explosions.”