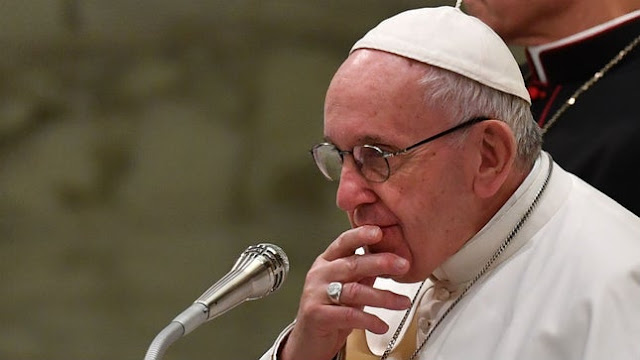 Pope Francis called on world leaders to renounce atomic weapons during a visit to Nagasaki, the site where an a weapon of mass destruction exploded after the U.S. dropped it on Japan during World War II.

The Pope said in a Sunday speech that the stockpiling of nuclear weapons decreases global security, waste’s a country’s resources and threatens humans everywhere. He placed a wreath of flowers on and prayed at a memorial to the victims of the 1945 bombings, saying that the monument reminds him “of the pain and horror that we human beings are capable of inflicting upon one another,” according to the Associated Press.

“Convinced as I am that a world without nuclear weapons is possible and necessary, I ask political leaders not to forget that these weapons cannot protect us from current threats to national and international security,” he said. He is the second pope to pay respects to victims of the atomic bomb, the AP reported.

Francis visited Nagasaki, and will later visit Hiroshima, over a three-day trip to Japan centered around calling for a worldwide ban on atomic weapons.

The Holy See was one of the first nations to ratify the new U.N. nuclear prohibition treaty, and Francis has repeatedly condemned the use and possession of atomic weapons, according to the AP.

“One of the deepest longings of the human heart is for security, peace and stability,” he said Sunday. “The possession of nuclear and other weapons of mass destruction is not the answer to this desire; indeed they seem always to thwart it.”

“Peace and international stability are incompatible with attempts to build upon the fear of mutual destruction or the threat of total annihilation,” he continued. “They can be achieved only on the basis of a global ethic of solidarity and cooperation.”

Francis specifically targeted a “climate of distrust” among countries as international organizations advocate for nuclear nonproliferation. He called the money spent on nuclear weapons and their management “an affront crying out to heaven.”

“In a world where millions of children and families live in inhumane conditions, the money that is squandered and the fortunes made through the manufacture, upgrading, maintenance and sale of ever more destructive weapons, are an affront crying out to heaven,” Francis said, the AP reported.