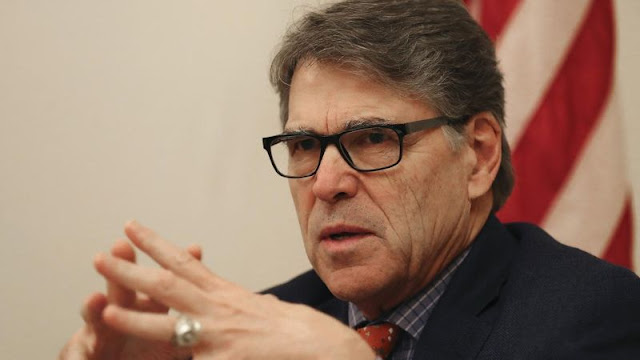 Outgoing Energy Secretary Rick Perry on Friday refused a request from House impeachment investigators to testify next week as part of their inquiry into President Trump.

"The Secretary will not partake in a secret star chamber inquisition where agency counsel is forbidden to be present," Department of Energy press secretary Shaylyn Hynes said in a statement.

"If the committee is interested in conducting a serious proceeding they are welcome to send for the Secretary’s consideration an invitation to participate in an open hearing where the Department’s counsel can be present and the American people can witness."

Perry was scheduled to testify behind closed doors on Wednesday, along with acting Office of Management and Budget (OMB) Director Russell Vought, State Department counselor T. Ulrich Brechbuhl and Under Secretary of State for Political Affairs David Hale.

In a letter sent to Democratic lawmakers earlier this month, Perry said he would not comply with a House subpoena to turn over documents tied to his involvement with Ukraine, referring to Democrats’ “impeachment inquiry” in quotes and saying the probe into Trump’s dealings with Ukraine was invalid.

House investigators are looking for more information on Perry’s role in dealing with Ukraine, including whether he helped convey or reinforce Trump’s alleged quid pro quo that tied investigations into former Vice President Joe Biden to the disbursement of military aid.

Perry has denied any wrongdoing, telling Fox News earlier this month that there was no quid pro quo and that his goal was to “get Ukraine back in the sphere of influence in the United States.”

“They have to do some things. They have to show us they're going to respect the rule of law, you're going to be transparent, they're going to unbundle their midstream gas company," Perry said. "All of those things were part of him coming in. And I think that's completely and absolutely legitimate. That's what we're supposed to be doing."