One field, bountiful blessings in Dalhart 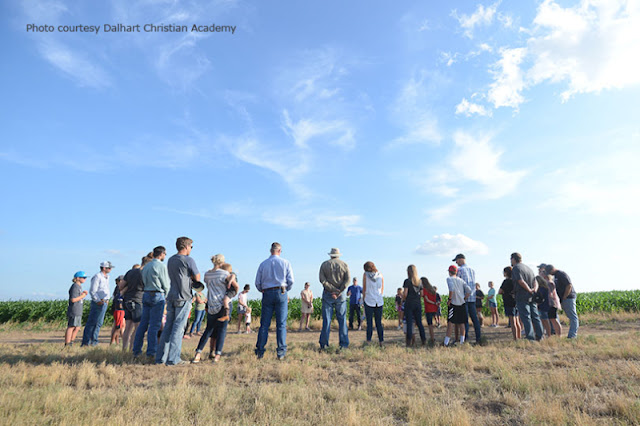 One farmers’ generosity, a close-knit community and hard work has led to two harvests and a wealth of opportunities for students at Dalhart Christian Academy (DCA).

Earlier this year, a long-time supporter of the school who wishes to remain anonymous, donated a circle to the school to farm.

“They still own the farm. They’re just letting us farm it rent free,” Julia Williams, the school’s public relations director, said in an interview with the Texas Farm Bureau Radio Network.

Almost all of the inputs for the crop were donated by the community.

“Dalhart is a community that is rooted in agriculture. Almost everyone here is connected to agriculture in one way or another,” Williams said. “Our board—we have farmers and seed dealers—convened a team of people to help farm the circle.”

The school only had to pay for electricity for the irrigation on the circle.

The silage was contracted to go to a dairy.

“We’ll be able to use the proceeds from the crop to support the school,” Williams said. “Our tuition doesn’t cover the full cost to run the school. So, we fill the gap with fundraising.”

The funding will be used for extracurricular activities, the computer lab and library.

“(The students) are excited about the new opportunities we’ll be able to implement because of the funding,” Williams said.

The school, which was originally kindergarten through fifth grade, has recently expanded into junior high and now offers sports.

She said there’s now talk of adding a high school.

The opportunities afforded to the school didn’t stop at the school’s doors, according to Williams.

The school also planted sweet corn, which was picked by the students and their families.

“We used the sweet corn to distribute to ministries here in Dalhart,” Williams said. “The ones that helped pick the sweet corn and distribute it commented how special it was to be able to give forward. People donated the farm to us, and then we’re able to grow the product and donate it.”

In late September, DCA hosted a pre-harvest celebration with a meal at the farm to celebrate the partnership.

There was barbecue, some of the sweet corn grown in the circle, hay rides and pumpkin bowling.

Williams said it’s a blessing to see the community come together to form a circle to support the continued education of local students.

The farmer who donated the circle indicated if it does well, he may make a second circle available for another crop next year.

“So far it’s been fantastically successful, so we’re hopeful we can continue this partnership and grow it in the future,” Williams said.

DCA was founded in 1997 and focuses on helping students grow academically, personally and spiritually.