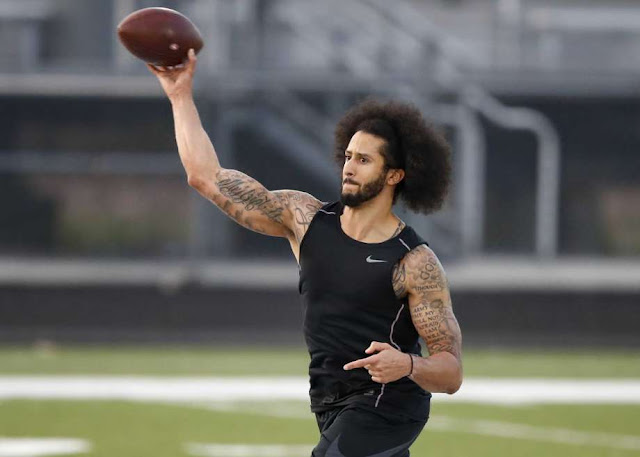 Colin Kaepernick’s workout for NFL teams in Atlanta this weekend did not run smoothly. The league announced an invitation to scouts from every team to watch Kaepernick work out and demonstrate that he was still ready to play. The workout was oddly timed; the NFL season is just a bit past its midpoint and most teams have their quarterback and are either competing for the playoffs or already tanking for a better draft pick.

Less than an hour before Kaepernick was scheduled to take the field in front of NFL scouts in Atlanta, his camp objected to the waiver Kaepernick was expected to sign and decided to move the workout to a high school an hour away. The NFL didn’t want media or cameras in the workout, but Kaepernick’s camp said they wanted transparency. Seven teams sent representatives to the new location.

After exhibiting his skills, Kaepernick made a short speech to the assembled press, declaring, “I’ve been ready for three years. I’ve been denied for three years. We all know why I came out here and showed it in front of everybody. We have nothing to hide. So we’re waiting for the 32 owners, the 32 teams, Roger Goodell, all of them to stop running! Stop running from the truth, stop running from the people.”

After the workout, Kaepernick was seen speaking with scouts from the Washington Redskins, New York Jets, and Kansas Chiefs, and told them, “When you go back, tell your owners to stop being scared.”

Kaepernick has his reasons to regard NFL owners with suspicion and distrust, and reasons to believe that many people who oppose his political stances want to see him fail. Judging from what Kaepernick displayed at his tryout, he’s as healthy as he ever was, he hasn’t lost a step, and his skills haven’t atrophied. He’s 32 years old, but barring injury, he should have another three or four good years in him, and maybe more.

But in the end, his leverage is limited. He needs (or at least wants) some team to hire him, and no team has seen him as worth the trouble since his time with the San Francisco 49ers ended after the 2016 season.

What’s preventing teams from hiring Kaepernick? Perhaps some owners and general managers are motivated by pure political or ideological animus. But for many, it’s probably the controversy that has followed Kaepernick everywhere he goes since he first refused to stand for the national anthem and everything from the praise for Castro, to the cops-as-pigs-socks, to the Betsy Ross sneaker controversy. If Kaepernick signs with a team, that team will instantly be under the microscope like never before. If Kaepernick is signed to be the backup quarterback, he will be the most intensely covered, discussed, and debated backup quarterback in the league.

And on Saturday, Kaepernick indicated that his bitterness towards NFL owners and the commissioner hasn’t changed a bit. Ending Saturday with a declaration that all of his potential employers are “scared” and “running from the truth” is not a good way to build a new sense of trust with a new team.

Some players argue that issues that the media cites as distractions for a team are distractions only for the media — that when a linebacker is rushing at them on a blitz, or they’re trying to break up a pass to a swift-footed receiver, no player is thinking about an off-the-field controversy. That’s probably generally true, but good teams tend to avoid distractions; notice the New England Patriots cut ties with Chad “Ocho Cinco” Johnson, Aaron Hernandez, and Antonio Brown once the headaches from controversy exceeded the benefits of the talent. The Patriots operate under a simple, direct, no-glory, no-hype slogan: “Do your job.” Players aren’t paid for creating headlines, generating controversy, building large social media followings, or even gaudy stats if they don’t translate into wins.

Could Kaepernick improve some teams out there? Maybe. But no owner wants to hire an employee who starts trashing him during the job interview process. Kaepernick seems to think that he’ll generate enough public pressure for some team owner to relent.

What’s different about now compared to the past three years?