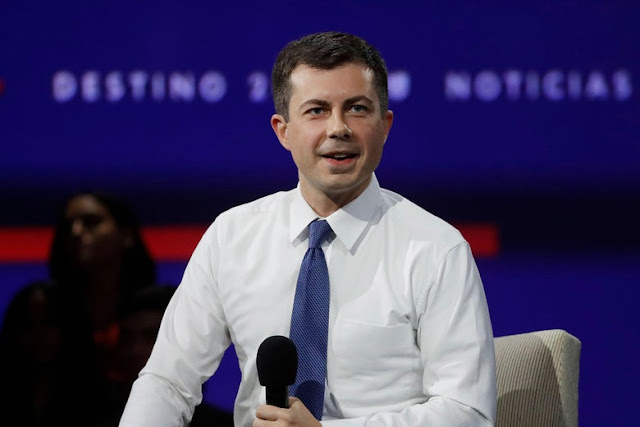 It’s been clear for a while that Mayor Pete was on the move in Iowa, and now a CNN/Des Moines Register poll crowns him the new front-runner in the caucuses, with a 9-point lead. His fav-unfav is a remarkable 72–16. This is a real surge, and interestingly he’s done it by shrewdly pivoting into the Biden lane.

The Democratic race was distorted at the start by almost all the candidates, including Buttigieg, thinking that they needed to win some part of the Sanders lane. (This is one reason that Warren, idiotically, endorsed the Sanders version of Medicare for All.) But Buttigieg has recalibrated.

Harry Enten of CNN breaks it down:

Take a look at where Buttigieg is scoring among different ideological groups. He’s at 12% among those who say they are very liberal, 25% among those who identify as liberal, and 30% among moderates and conservatives.

This pattern simply didn’t exist in our September poll. Buttigieg was at 7% among very liberals, 14% among liberals who aren’t very liberal, and 8% among moderates and conservatives.

In other words, Buttigieg’s actually doing worse with very liberal caucusgoers than he was in June, even as he is doing considerably better among caucusgoers overall.

Today, 63% of likely caucusgoers believe Buttigieg’s ideology is “about right”. That’s the highest of any candidate tested. A mere 7% believe he’s too liberal, while 13% think he’s too conservative.

Buttigieg seems to be taking advantage of a rising number of caucusgoers who think Warren is too far left. Now, 38% believe she is too liberal, which is up from 23% in March. That could be deadly for her campaign if voters think her leftward tilt hurts her electability.

But perhaps the candidate most harmed by this Buttigieg’s tack to the center is Biden. Biden’s down from 31% among moderate and conservatives in September and June to 20% now.

If Buttigieg can convince African Americans that he’s a relative moderate who’s electable, he may begin to make some in-roads there (and become a serious threat for the nomination), although there’s no sign of it yet.

As for his lead in Iowa, it’s still early.

This now commences the part of the race where every aspect of Buttigieg’s bio and his policy agenda gets a scrutiny that it has never faced before.