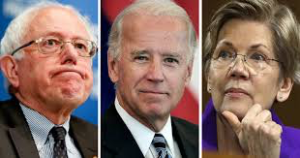 Democrats aren’t sure they have the right candidate to beat President Trump in next year’s general election.

The party has been obsessed with finding the most electable candidate throughout the year, but less than 100 days before the Iowa caucuses, donors and grassroots voters still aren’t sure their field includes the right person.

The anxiety has given a reason for new candidates to throw their names into the race. Former New York City Mayor Michael Bloomberg is considering a run and on Tuesday filed the paperwork to get his name on the ballot for Arkansas’s primary.

Former Massachusetts Gov. Deval Patrick is also reconsidering his plans, and the uncertainty is spurring new questions about whether 2016 Democratic presidential nominee Hillary Clinton could make a comeback.

“There are still a lot of people out there who believe there isn’t one standout candidate,” said one Democratic strategist who remains undecided because of the lack of appeal among the candidates. “It’s a diverse field but that doesn’t mean it’s a strong field.”

Two candidates are generally seen as the front-runners in the race, but both face questions from Democrats.

Progressive Sen. Elizabeth Warren (D-Mass.) has impressed with her policy plans, and she’s drawn huge crowds on the campaign trail. But her upward trajectory in the race has scared moderate Democrats who think she can’t beat Trump in a general election.

Former Vice President Joe Biden leads in a number of national polls and came in first in a Quinnipiac poll of New Hampshire that was released on Monday. He’s been boosted by strong support from African American Democrats. But his shaky performances at several debates have raised questions about whether he’s ready to take on Trump, or if he’s past his prime. Biden will turn 77 later this month.

The anxiety is creating fluidity in the race.

A new Monmouth poll released Tuesday found the centrist South Bend, Ind., Mayor Pete Buttigieg in first place in Iowa with 22 percent support from likely Democratic caucusgoers. Biden was in second with 19 percent and Warren just a tick behind with 18 percent. Sen. Bernie Sanders (I-Vt.) was fourth with 13 percent.

The fact that the top three candidates were within 4 points of one another underscores the sense that it’s anyone’s race, and that some voters are still shopping for a candidate.

Democratic strategist Chris Kofinis said the tensions are high because of the desire to defeat Trump, and the nervousness that none of the candidates can do it.

Some Democrats “see this lurch to the left among some of the front-runners and they think, ‘This is a recipe to lose,’ ” Kofinis said.

“There’s a shared desire to beat Trump but a distinct difference as to what kind of candidate can beat him,” he added.

The fears for Democrats reached a crescendo after The New York Times published a poll it conducted with Siena College that found Democratic candidates in tight races with Trump in the key battleground states that will decide the election: Pennsylvania, Michigan, Wisconsin, Florida, North Carolina and Arizona.

The polling also showed Biden doing better in head-to-head match-ups with Trump than Warren did in those states.

The poll served as a “wake-up call” to Democrats that they can’t take Trump for granted, said Democratic strategist Brad Bannon.

“There’s been a mood swing since the survey came out,” Bannon explained. “The drop in Democratic morale accounts for the recent buzz about Clinton, Bloomberg and Patrick.”

“Many Democrats were surprised that Trump was running even with the Democratic candidates in the battleground states after countless scandals and revelations from the impeachment inquiry,” he said. “Many of these Democrats had bought into the idea that Trump would be easy pickings for Biden and were dismayed that he wasn’t doing much better against Trump than the other Democratic hopefuls.”

The NYT-Siena poll showed Biden running even in Michigan with Trump, and Warren running 6 points behind the president. Sanders had a 2-point lead over Trump in Michigan.

In Florida, Biden was up by 2 points, Sanders was behind Trump by 1 point and Warren trailed Trump by 4 points.

Biden allies are quick to point out those polling figures. They have also touted his appearance on a CNN town hall on Monday where he generally received good reviews.

“Joe Biden just needs to keep being Joe like at [Monday night’s] town hall,” said Robert Wolf, the Democratic mega-donor who has contributed to Biden’s campaign but remains uncommitted.

Biden is “the guy red, blue and purple voters respect,” Wolf said. “He doesn’t need to look at who is in front of him nor behind him nor not yet on the field.”

There are plenty of Democrats who disagree with that sentiment, however.

“Clearly a lot of people aren’t convinced that he’s the right guy,” the Democratic strategist said.

“But no one else really is either.”