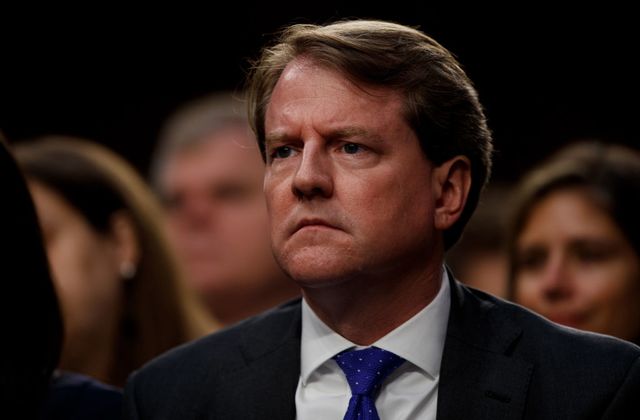 A federal judge on Monday ruled that former White House counsel Don McGahn must testify before Congress, delivering a significant win to House Democrats amid their impeachment inquiry into President Trump.

In her ruling, U.S. District Judge Ketanji Brown Jackson, an Obama appointee, said McGahn is obligated to comply with a House Judiciary Committee subpoena from April seeking to compel his testimony.

But the legal fight over McGahn's testimony is likely far from over.

McGahn's lawyer William Burck said in a statement that his client would comply unless there is a stay.

“Don McGahn will comply with Judge Jackson’s decision unless it is stayed pending appeal. The [Department of Justice] is handling this case, so you will need to ask them whether they intend to seek a stay,” said Burck.

The White House, though, has already said it would appeal the decision.

“This decision contradicts longstanding legal precedent established by Administrations of both political parties. We will appeal and are confident that the important constitutional principle advanced by the Administration will be vindicated,” said White House press secretary Stephanie Grisham.

Monday's decision was only the latest development in a series of court battles over separation of powers that have pit the Democratic-led House’s oversight authority against claims of presidential immunity and privacy.

“I am pleased the court has recognized that the Trump Administration has no grounds to withhold critical witness testimony from the House during its impeachment inquiry,” House Judiciary Committee Chairman Jerrold Nadler (D-N.Y.) said in a statement.

“Now that the court has ruled, I expect him to follow his legal obligations and promptly appear before the Committee,” Nadler said of McGahn.

The ultimate significance of McGahn’s testimony remains an open question. While the impeachment inquiry so far has centered on Trump’s dealings with Ukraine, Democrats have held open the possibility of pursuing issues investigated by former special counsel Robert Mueller, including Trump’s possible obstruction of justice.

If House Democrats pursue that course, McGahn’s testimony could prove critical given the central role he played in that particular phase of the probe, which examined 10 "episodes" of possible obstruction. The Mueller report found "substantial evidence" that Trump leaned on McGahn to fire Mueller.

Lawyers for the House Judiciary Committee previously told Jackson that McGahn possessed information that is “relevant and important” to the impeachment inquiry and had asked the judge to fast-track a decision on the former White House counsel’s testimony.

“As a matter of law, such aides do not have absolute testimonial immunity,” the judge wrote.

Jackson also dismissed the Justice Department’s argument that the court and Congress are rendered powerless in the face of a White House decision to block senior aides from testifying under subpoena. She said the agency’s argument “promotes a conception of separation-of-powers principles that gets these constitutional commands exactly backwards.”

“In reality, it is a core tenet of this nation’s founding that the powers of a monarch must be split between the branches of the government to prevent tyranny,” she added.

The House Judiciary Committee subpoenaed McGahn in April, days after the release of Mueller’s 448-page report, the culmination of a nearly two-year investigation into Russia’s 2016 election interference, the Trump campaign’s contacts with Moscow and Trump’s possible obstruction of justice.

In addition to McGahn’s perspective on the obstruction investigation, House Democrats have also said the former White House counsel is a key witness in Trump’s removal of both former national security adviser Michael Flynn and former FBI Director James Comey.