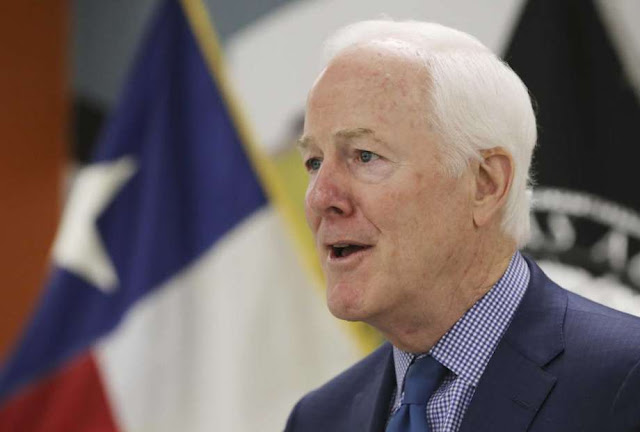 Sen. John Cornyn (R-Texas) said on Monday that he didn't see an example of quid pro quo during the conversation between President Trump and Ukraine President Volodymyr Zelensky, but argued that even if there was, it wouldn't warrant removing the president from office.

Cornyn, when asked if there was a quid pro quo, pointed to a rough transcript of the conversation between the two leaders, saying he didn't "see the quid pro quo."

"Even if there was, I don't think it would be impeachable or illegal for the president to do so. So this is just an excuse, I think, to continue this campaign that's existed since the president was sworn in to remove him from office," Cornyn said during an interview with Texas radio station KFYO.

The Washington Post reported last week that some Senate Republicans were mulling a strategy that would acknowledge a quid pro quo, but also argue that the action was not illegal and it was not impeachable.

Cornyn argued on Monday there was a "double standard" being applied to Trump's actions.

"What never fails to amaze me is the double standard that is applied to this president as opposed to other presidents. It's always been the case that presidents have been able to leverage aid to other countries in order to advance U.S. policy. And here there was a corruption problem in Ukraine," Cornyn said.

Trump, during his conversation with Zelensky, asked the Ukraine president to work with his personal attorney, Rudy Giuliani, to "look into" former Vice President Biden and his son, Hunter Biden.

In their ongoing impeachment investigation, Democrats have focused on that call, a related whistleblower complaint and whether or not Trump tied aid to the country to Ukraine opening up an investigation into the Bidens.

The House is expected to start holding public hearings as soon as this month as part of its investigation.

Republicans view it as increasingly likely that the House will vote to impeach Trump, setting up a trial in the Senate.

Cornyn, on Monday, said there wasn't "any reasonable chance," based on current information, that the Senate would convict Trump, an action that requires the vote of 67 senators.

Instead, he argued that Trump should focus on policy, and let Senate Republicans handle the impeachment articles if they come over from the House.