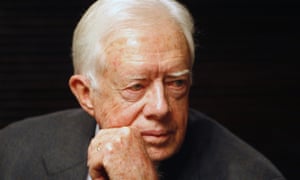 Former President Carter was admitted to a hospital late Monday night to undergo a procedure to relieve brain pressure caused by bleeding due to his recent falls, a spokesperson said.

The procedure is set to take place Tuesday morning at Emory University Hospital. Carter's wife, Rosalynn Carter, accompanied him to the hospital, where he is "resting comfortably," the spokesperson said.

Carter, the longest-living former U.S. president ever, has suffered multiple falls in the past month. In late October, he was admitted to the hospital after fracturing his pelvis following a fall in his home in Georgia.

Just weeks before, Carter, 95, required stitches above his eyebrow after a fall in his home. The former president has continued to take part in teaching and charity events despite his injuries.

Just a day after requiring stitches above his brow, Carter volunteered to help build homes for Habitat for Humanity in Tennessee.

He taught a 45-minute Sunday school lesson at the Maranatha Baptist Church earlier this month. Carter sat on a motorized lift chair amid the lesson, one in which he said that he was "at ease" with the idea of dying, The Associated Press reported.