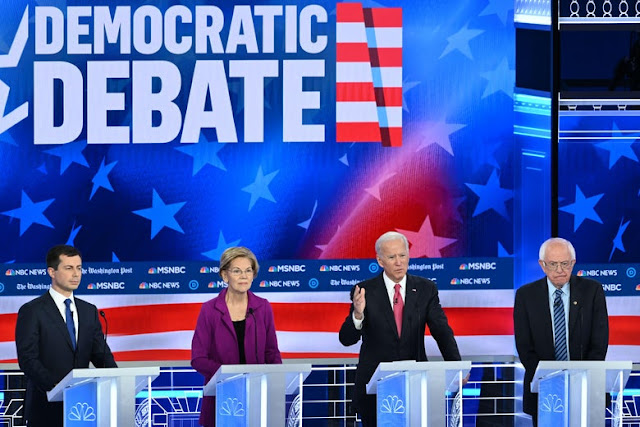 Ten Democrats took the stage here Wednesday night with less than three months to go before the Iowa caucuses — and after a day of high political drama at the impeachment hearings back in Washington.

Here were the key takeaways:

Buttigieg benefits from a lack of game-changing moments

The debate had some fireworks, but nothing that seemed consequential or viral enough to change the trajectory of the race.

That is good news for South Bend, Ind., Mayor Pete Buttigieg, who has been on the rise. The 37-year-old Buttigieg has led major polls in both Iowa and New Hampshire recently. That being so, many pundits expected his rivals to go after him in Atlanta.

Those attacks simply didn’t materialize in the crucial first half of the debate, when the only true challenge Buttigieg faced was a pointed question about his experience from Andrea Mitchell of NBC News, one of the four moderators.

Toward the end of the debate, Sen. Kamala Harris (D-Calif.) hit Buttigieg harder when she alluded to his lack of support among black voters, but the South Bend mayor parried by agreeing with a larger point about not taking voters for granted. Buttigieg also clearly got the better of Rep. Tulsi Gabbard (D-Hawaii) in a tense exchange.

But the debate had a low-wattage feel, overshadowed by the stunning testimony of U.S. Ambassador to the European Union Gordon Sondland to the impeachment inquiry in Congress earlier in the day.

For Buttigieg, that means he can leave happy that his momentum went unchecked.

Former Vice President Joe Biden has retained the position of front-runner in national polls despite shaky performances in debates.

He failed to impress again on Wednesday night. His first answer meandered and then, after seeming to find his composure for a while, he stumbled again in the debate’s second half.

Perhaps the most memorable Biden gaffe was his assertion that he had the support of the “only” elected black female senator.

Biden was referring to former Sen. Carol Moseley Braun (D-Ill.), but his phrasing drew understandable consternation from Harris, the child of Jamaican and Indian parents who was elected to the Senate in 2016.

“The other one is here,” she said.

Biden’s propensity for clumsy phrasing got him into murky water on other occasions, too, as when he said, “I come out of the black community, in terms of my support” and that the remedy for domestic violence was to “keep punching at it.”

The broader problem for Biden is that he is far from a commanding presence on the debate stage.

He receded into the background for long stretches of Wednesday’s debate, and Democrats are bound to question how strongly he would perform in a showdown with President Trump.

Harris shines, but is it too late?

Harris had her best debate performance since the first clashes in Miami in late June. She hit Trump in memorable terms for having got “punked” in his negotiations with North Korea and called him a “criminal living in the White House.”

She easily brushed aside a challenge from Gabbard, held her own in the race-related exchange with Buttigieg, and presented herself as the best person to recreate the “Obama coalition” that won Democrats the White House handily in 2008 and 2012.

The problem for Harris is that the momentum she enjoyed several months back, in the wake of the Miami debate, is a distant memory. She has drifted down badly in the polls and is no longer in the top rank of candidates occupied by Biden, Warren, Sanders and Buttigieg.

Could Harris’s performance persuade voters to take a fresh look at her — or have they decided they are not buying what she’s selling?

The debate, hosted by MSNBC, was the first of this cycle to have an all-female panel of moderators: Mitchell, MSNBC anchor Rachel Maddow, NBC News White House correspondent Kristen Welker and The Washington Post’s Ashley Parker.

The panel clearly had an impact, foregrounding issues such as paid family leave, domestic violence and reproductive rights in a way that had not been the case with previous debates.

Gender politics also arose in other ways, such as when Sen. Amy Klobuchar (D-Minn.) asserted that women are “held to a higher standard, and that’s a fact.”

Klobuchar was making her point in relation to Buttigieg, having previously suggested that a woman with his level of experience would not be granted the prominence and positive media coverage the South Bend mayor has enjoyed.

Heat gets turned down in left vs. center fight

The great ideological divide in the primary is clear: will the Democratic Party choose a standard-bearer from the left, such as Warren or Sanders, or from the center, such as Biden or Buttigieg?

Those tensions bubbled up from time to time on Wednesday — notably when Buttigieg again criticized Warren’s "Medicare for All" plan. But the exchanges had little of the heat felt in October’s debate in Ohio.

Klobuchar and Sen. Cory Booker (D-N.J.) both expressed concerns that the party should not swing too far left, and Buttigieg insisted that the way to electoral victory was to “galvanize” rather than “polarize” the nation.

Warren and Sanders remain faithful to their belief that the nation needs fundamental change.

On Wednesday night, though, those substantive differences never manifested in any real enmity. The impression was of candidates with divergent views, not a party on the brink of civil war.