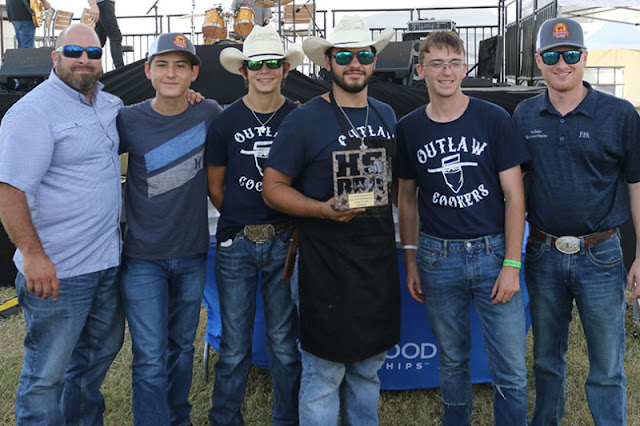 Smoke, spice jars and barbecue were on full display as students from across Texas participated in the first-ever World Food Championships High School BBQ competition on Oct. 20 in Dallas.

Among those were members of the FFA chapter at James Madison High School in San Antonio. They’re part of the fast-growing statewide High School BBQ competition organization.

High School BBQ, Inc. is the brainchild of a culinary arts teacher and a veteran pitmaster, Chuck Schoenfeld, who competed professionally in barbecue cookoffs for more than 40 years. Five years ago, they embarked on a journey to bring competition barbecue cookoffs to high schoolers in Texas.

The organization now hosts a series of 10 regional competitions around the state in which the top 10 teams from each event advance to the state championship in May.

“This is our second year of doing traveling regional cookoffs. We are growing with leaps and bounds,” Chuck said. “It’s going to be a very, very fun and chaotic season for us. Our goal is to have 100 teams at the championship this year in Burnet, Texas.”

And the teens learn so much more than just how to smoke a brisket.

“It’s a passion. We really love the high schoolers,” Marnie Schoenfeld, Chuck’s wife and head judging facilitator for High School BBQ, said. “They’re learning a skill that they can then show their own children someday, or maybe they’ll come back as college students and mentor a team. It teaches them teamwork, cooking, problem-solving, time management and leadership lessons that will last a lifetime.”

The World Food Championships (WFC) is an annual competition created to spotlight the best chefs, cooks and pitmasters in the world as they vie for the championship title and hundreds of thousands of dollars in prize money.

It was the first year the WFC was held in Dallas. Mike McCloud, the president and CEO of WFC, said when he heard about Texas high school barbecue teams, he knew they had to be part of the event somehow.

“The purpose of the World Food Championships is to identify and celebrate great cooks and chefs regardless of their training or background,” McCloud said. “We felt High School BBQ was a wonderful way to embrace the next generation and ignite that fire in their belly for food competitions.”

Not bad for a school that didn’t even have barbecue teams until January.

“I heard about High School BBQ last fall and was interested, but I’m not one that barbecues,” Lane Baker, James Madison agricultural science teacher and FFA advisor, said. “I’m more of the master of the microwave, but a couple of dads of students helped out, and we’ve formed some really good teams.”

In addition to gaining a variety of practical skills, Baker’s students say they’ve formed a better understanding of agriculture through the experience.

Gage White, a sophomore member of the Outlaw Cookers, has been raising and showing pigs through FFA for several years. The connection between animal and meat is a lot clearer to him now.

But it’s not all about studying meat charts and out-smoking other teams. There’s a lighter side to high school barbecue, too.

“It’s competitive, but it’s not just about us and winning. Our families are a big part of this,” Savannah Bond, a junior who’s on the all-female Bar-B-QTs team, said. “For practices, we all go to one house, and we cook, and we eat, and we all hang out. We all feel like a big family.”