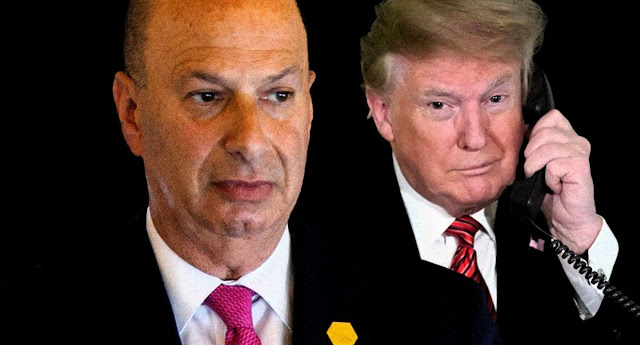 A top diplomat appointed by President Trump revised his testimony to lawmakers in the House's impeachment inquiry, saying in the latest version that the president’s dealings with Ukraine amounted to a clear quid pro quo.

U.S. Ambassador to the European Union Gordon Sondland said Trump withheld U.S. military aid to Ukraine in an effort to secure investigations into the 2016 election and the president’s political adversaries, according to a transcript released Tuesday by Democrats conducting the impeachment investigation.

His testimony and that of former U.S. special envoy to Ukraine Kurt Volker was released Tuesday.

Sondland, a Republican mega-donor who gave $1 million to Trump’s inauguration, was interviewed by lawmakers behind closed doors on Oct. 17 but revised his testimony on Monday, after a string of subsequent witnesses appeared before the three committees leading the impeachment investigation.

In the revision, Sondland said he recalled a Sept. 1 meeting with Andriy Yermak, a top aide to Ukrainian President Volodymyr Zelensky, in which the aid was contingent on a public statement from Zelensky regarding launching probes that would benefit Trump politically.

“After a large meeting, I now recall speaking individually with Mr. Yermak, where I said that resumption of U.S. aid would likely not occur until Ukraine provided the public anti-corruption statement that we had been discussing for many weeks,” Sondland said.