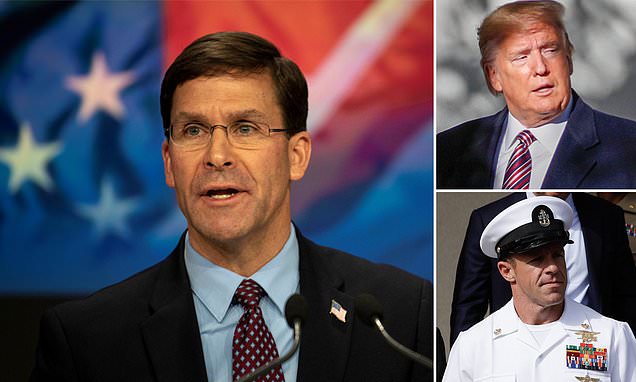 Defense Secretary Mark Esper on Monday confirmed that President Trump ordered him to allow a Navy SEAL to keep his Trident pin despite his conviction for posing with the corpse of a slain ISIS fighter.

“I spoke with the President on Sunday. He gave me the order that Eddie Gallagher will retain his Trident pin,” Esper told reporters at the Pentagon, referring to Special Operations Chief Edward Gallagher.

Trump last week tweeted that he wanted Gallagher to be allowed to retire as a SEAL, but Esper’s new admission shows that Trump directly intervened to make sure it happened, breaking with the regular process which would have included an internal Pentagon review of the case.

Trump reversed the demotion and pardoned two other service members accused of war crimes, going against the wishes of military leaders.

Gallagher earlier this year was acquitted of murder after he was accused of stabbing a captured enemy combatant, but for posing next to the dead man’s body he was convicted of bringing discredit to the armed services and demoted.

Esper said that when he spoke with Trump on Sunday to update him on the situation, the president pressed for Gallagher’s Trident pin to be restored and he replied, “Roger, I got it.”

He also indicated that the case had become too much of a distraction and was being put to rest at the Pentagon.

“The case of Eddie Gallagher has dragged on for months and has distracted too many. It must end,” Esper said. “Eddie Gallagher will retain his Trident as the commander in chief directed and will retire at the end of this month."

He later added, “I want the SEALs and the Navy to move beyond this now and get fully focused on their warfighting mission.”

He also addressed criticisms of Trump’s interference in the Pentagon’s process.

“If folks want to criticize anyone at this point for reaching down into administrative processes, simply blame me. I’m responsible at this point. It’s not where I prefer to be, but I’ll own it,” Esper said.

“I can control what I can control. I’m the secretary of Defense responsible for the department. My view is, we will follow our processes. That is what we agreed to. That is the position I took to the White House. ... The president is the commander in chief, he has every right, authority, and privilege to do what he wants to do.”

Esper also told reporters that former Navy Secretary Richard Spencer, who stepped down the day prior, told him he would quit if he was made to give Gallagher his Trident.

Esper, Spencer and Trump have all given different reasons for Spencer’s ouster.

The Pentagon, in a Sunday statement, said Esper asked for Spencer’s resignation after he found out that Spencer privately asked White House officials to allow Gallagher to retain his Trident pin, going behind Esper's back, if Trump agreed to let the legal process run its course.

“I am deeply troubled by this conduct shown by a senior [Department of Defense] DOD official," Esper said in the statement. "Unfortunately, as a result I have determined that Secretary Spencer no longer has my confidence to continue in his position. I wish Richard well.”

Spencer, however, said in a letter that he was leaving because “I cannot in good conscience obey an order that I believe violates the sacred oath I took in the presence of my family, my flag and my faith to support and defend the Constitution of the United States.”

And Trump over several Twitter posts on Sunday said he was “not pleased” with the way the Navy handled Gallagher's trial. He also pointed to “large cost overruns from past administration's contracting procedures [that] were not addressed to my satisfaction,” though he did not note which programs he was referring to.

Esper said Monday that “contrary to the narrative that some want to put forward in the media, this dismissal is not about Eddie Gallagher, it's about Secretary Spencer and the chain of command."