DNC chief: 'Texas is a battleground' 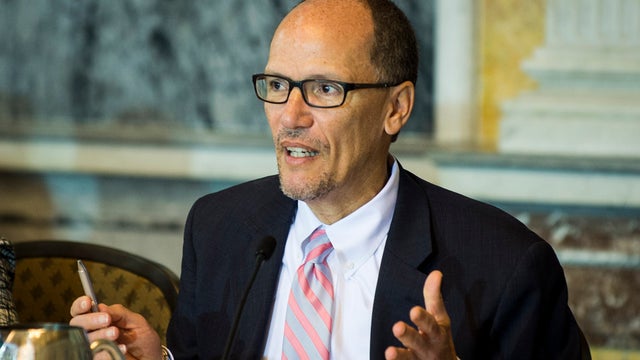 Democratic National Committee (DNC) chairman Tom Perez on Wednesday declared Texas a battleground state and said the national party intends to compete there in 2020, from the presidential level on down.

“We strongly believe that Texas is a battleground,” Perez said at a breakfast hosted by the Christian Science Monitor, arguing that Trump’s rally in Dallas last month signals that the president is on the defensive in the Lone Star state.

“This president is underwater in Texas. The poll I saw him in a month ago has the generic Democrat ahead of the president in the general election by something like 5 points. That’s why he was there. It’s remarkable that this president has to spend time in states like Texas and I think we can compete.”

Several surveys of Texas released this year have found Trump running neck and neck with the top Democratic White House hopefuls, although a Texas Tribune survey from October found Trump with a 5-point lead over the closest Democrat.

Trump carried the traditionally red state by 9 points in 2016, which was the worst showing for a GOP presidential candidate in 20 years.

Perez argued Wednesday that Democrat Andy Beshear’s victory in the Kentucky gubernatorial race the previous night is evidence that the party can win in Trump Country. Democrats have sought to tout the victory as a warning sign for Trump heading into 2020.

Trump won Kentucky by 30 points in 2016, though Gov. Matt Bevin (R) was deeply unpopular heading into the election and Republicans still swept five other statewide races on the ballot on Tuesday, despite Bevin's loss.

Most strategists in Texas believe Democrats are getting ahead of themselves when they talk about turning the state blue.

A Democrat has not won a statewide race in Texas in 25 years. Jimmy Carter was the last Democratic presidential contender to carry the state back in 1976.

O’Rourke turned out more Texas Democrats than Hillary Clinton did in the 2016 presidential election.

“I think we can win the Senate race,” Perez said.

O’Rourke has dropped out of the race for the 2020 Democratic presidential nomination and says he will not join the crowded field of candidates vying to take on Cornyn. The Democratic Senate field is led by Mary Jennings Hegar, an Air Force veteran.

Most Republicans are bullish on Cornyn’s prospects, and he will begin the race with a massive money advantage over whoever emerges from the Democratic primary.

The best shot for Democrats to compete in Texas may be in the six House districts the party has circled as having potential to flip from red to blue.

Democrats are energized by the so-called “Texodus” – so far, six GOP House members from the state have decided to retire rather than seek reelection, including three targeted by Democrats whose races are rated as either toss-ups or lean Democratic by the nonpartisan Cook Political Report.

“Donald Trump wins a state by 30 points and he can’t drag a Republican across the finish line in that state. If I’m a Republican in a swing or even close to swing district, I’m looking at myself in the mirror.”

Democrats are also eyeing power at the Texas state House, where they need to flip nine seats to claim a majority.

“I think we have a real shot at taking over the House of Representatives there, in addition to competing in the federal races,” Perez said. “Our partners at the Democratic Congressional Campaign Committee, they already have a field office in Texas because they correctly believe, and I couldn’t agree with them more, there are six opportunities now. There could be more coming up because Texas is a remarkable potential opportunity.”

The Democratic gains in Texas have largely been driven by domestic migration. Drawn by Texas’s booming economy, hundreds of thousands of new voters have resettled there from more liberal states, such as California, New York and Illinois.

Many have settled in the suburbs, where Trump’s support is eroding, helping to make the metro areas around Houston, Dallas, Austin and San Antonio some of the fastest growing in the country.

But changing demographics are also making Texas a bit more purple, and Perez said the party is heading into the state with an eye on Latino voters, noting that 800,000 more Latinos voted in 2018 than in 2014 and that Texas has 3.5 million eligible Latino voters who did not cast ballots in the past election.

“[Republicans] can’t compete on the merits for Latino votes, for African American votes, or Asian American votes, so they’re trying to make it harder for them to vote…that’s why we’re so invested in those communities,” Perez said.