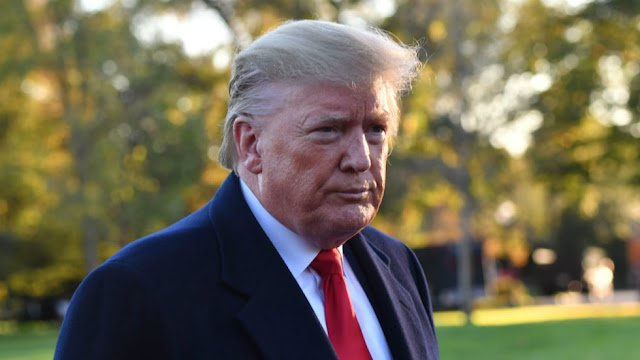 House Democrats on Monday released the first transcripts from their closed-door hearings.

The transcripts are the first full public accounting of testimony from former U.S. Ambassador to Ukraine Marie Yovanovitch and former top aide to Secretary of State Mike Pompeo, Michael McKinley.

They largely focused on the sequence of events that led to the recalling of Yovanovitch back to the United States.

The U.S. ambassador was seen as insufficiently loyal to Trump, and was the subject of a campaign by the White House and its allies to undermine her.

Here are five takeaways from the transcripts.

Testimony from both officials underscored the reluctance by the State Department to issue a public show of support for Yovanovitch as she came under fire from the president’s allies.

Yovanovitch said State Department officials were cautious about issuing statements supporting her because they feared it could be “undermined” by Trump.

“What I was told was that there was concern that the rug would be pulled out from under the State Department if they put out something publicly,” she said.

Yovanovitch tried to warn the State Department that remaining silent would not be “sustainable.”

“If you have the president's son saying, you know, ‘We need to pull these clowns,’ or however he referred to me, it makes it hard to be a credible ambassador in a country,” she said.

McKinley said he brought up the idea of providing a public show of support to the ambassador three times to Secretary of State Mike Pompeo, but that it fell to the wayside.

Yovanovitch said Gordon Sondland, a former hotelier and donor to Trump’s inaugural committee turned ambassador to the European Union, urged her to “tweet out there that you support the president” in order to bolster her job security.

Yovanovitch declined, telling investigators that she “just didn't see that there would be any advantage to publicly taking on a fight with those who were criticizing me in the United States” given the State Department’s silence.

At the heart of the House impeachment inquiry is that criticism that Trump should not have pushed Ukraine’s leaders to conduct politically motivated investigations that would benefit him to receive better treatment from the United States.

The full transcripts from McKinley and Yovanovitch offer new details on this front.

Yovanovitch said she was perplexed by the efforts of Trump’s personal attorney, Rudy Giuliani, to pressure Kiev to investigate former Vice President Joe Biden and his son Hunter, as well as claims about Ukraine’s involvement in 2016 election interference.

“It’s not like we had a policy that Ukraine should not become involved in our domestic politics or, you know, somehow become involved in 2020 elections,” she said, “but clearly that is not in U.S. interests for Ukraine to start playing such a role.”

“Would you call that, to some extent, antidemocratic?” an investigator asked.

“I think that elections should be for Americans to decide,” she replied.

Yovanovitch also said that Ukrainian Minister of the Interior Arsen Avakov expressed concerns to her about Ukraine getting into U.S. politics after communicating with Giuliani about Biden and the 2016 election at the beginning of this year.

McKinley said that it was unprecedented for the State Department to be involved in digging up dirt on a president’s political opponents.

“[I]f I can underscore, in 37 years in the Foreign Service and different parts of the globe and working on many controversial issues, working 10 years back in Washington, I had never seen that,” McKinley said in his testimony.

McKinley said at one point that he did not feel the entire department had become politicized under Pompeo, but that select individuals had, specifically citing Sondland and special Ukraine envoy Kurt Volker.

Pompeo to come under more scrutiny

McKinley’s testimony in particular poses difficult questions about Pompeo’s stewardship of the State Department during the Ukraine controversy that has engulfed the administration.

McKinley credited Pompeo with bringing the State Department back from what he described as a “hollowing out” under former Secretary of State Rex Tillerson. But McKinley repeatedly voiced frustration with what he viewed as a lack of support for career diplomats from State Department leaders as the Ukraine scandal burst into public view.

The former top aide to Pompeo told lawmakers that he had three conversations with the secretary of State about issuing a statement in support of Yovanovitch, but Pompeo ultimately decided not to publicly back the ambassador.

The department’s silence hampered the morale that Pompeo had worked to build back up upon taking over for Tillerson.

“It had a very significant effect on morale. And the silence from the Department was viewed as puzzling and baffling,” McKinley said of the lack of any public response from the department following the release of a rough transcript of Trump’s call with Ukrainian President Volodymyr Zelensky.

Pompeo was on the July 25 phone call and has repeatedly downplayed that there was any wrongdoing that took place with the administration’s policy toward Ukraine.

But with numerous current and former State officials among those who have testified to lawmakers in the impeachment inquiry, Pompeo is likely to remain one of the most scrutinized administration officials moving forward.

Democrats are seeking to keep pressure on Trump

Democrats have seen their investigation lead to a constant drip of negative headlines for the White House since early October, but that risked coming to a halt as top political appointees closer to Trump declined to show up for scheduled depositions, including Secretary of Energy Rick Perry and acting Office of Management and Budget Director Russ Vought.

The release of the transcripts allows Democrats to try to keep the pressure on, and House Intelligence Committee Chairman Adam Schiff (D-Calif.) said that the transcripts of testimony from Sondland and former Ukraine envoy Kurt Volker are expected to come out on Tuesday.

The committees had held off on fully disclosing the contents of closed-door depositions to prevent others from aligning their testimonies. But the release of the transcripts suggests that Democrats are moving closer toward public hearings that could start as soon as next week.

“The witnesses that bear most directly on those issues are the witnesses we’ll want to bring in,” Schiff said.

From the start, Republicans have demanded that Democrats release the full transcripts of all the closed-door witness depositions.

On Monday, they complained that Democrats were “selectively” releasing the transcripts instead of unveiling them all at once, in a recognition that the gradual process is likely to mean a more drawn-out series of negative headlines to shape public opinion.

“Democrats cherry pick which transcripts they release and when. Why not release Ambassador Volker’s testimony? He was the very first witness to testify!” Rep. Jim Jordan (R-Ohio) tweeted, shortly after Schiff told reporters that Volker’s testimony would be released the next day.

The transcripts show that GOP lawmakers in the depositions repeatedly complained about leaks to the media. Rep. Lee Zeldin (R-N.Y.) pressed Yovanovitch on how her opening statement had appeared in The Washington Post — and eventually other outlets — while the deposition was still ongoing.

“I think that you will attest that there has not been a leak of information from the Republican side that would be to our advantage written in any of the periodicals,” Rep. Mark Meadows (R-N.C.) said during McKinley’s testimony.

The transcripts of interviews with Yovanovitch and McKinley are the first of several House committees expect to release from more than a dozen closed-door depositions.

The effort marks the beginning of the new phase of the House impeachment inquiry in which Democrats are taking their findings public. Lawmakers are also expected to hold public hearings focused on Trump’s phone call with Zelensky and the administration’s interactions with Ukraine in the coming weeks, though neither an exact timetable nor a witness list have been set.

In the meantime, Democrats have sought testimony from more witnesses this week, including former Trump national security adviser John Bolton.

However, House committees are already running into impediments as they seek testimony from officials closer to Trump; four witnesses on Monday defied subpoenas to appear on instructions from the White House.

Bolton through his lawyer said he would not appear voluntarily but would accept a subpoena, though it’s unclear whether that will be enough to compel his appearance on Thursday.