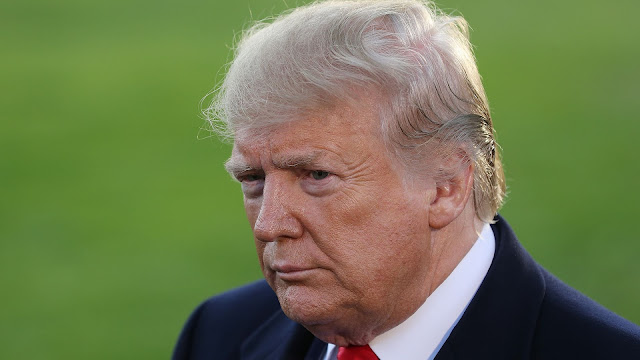 In a last-minute move, Democrats are shifting their impeachment rhetoric and talking points just days before the first public hearings into President Trump’s handling of foreign policy in Ukraine.

The televised hearings mark a crucial phase in an investigation conducted thus far behind closed doors, as Democrats seek to swing public opinion — and by extension, that of Republicans — behind the central inference of their impeachment inquiry: that Trump broke the law and should be removed from office.

As part of that outreach effort, many well-placed Democrats are dropping the opaque Latin phrase that has dominated the seven-week impeachment investigation — “quid pro quo” — and embracing distinct legal terms like “extortion” and “bribery” that are explicit in their reference to criminality and easier for the public to digest.

Rep. Jim Himes (D-Conn.), a senior member of the Intelligence Committee, which will be leading the impeachment hearings, said over the weekend that Democrats need to “forget quid pro quo.”

“When you are trying to persuade the American people of something really pretty simple, which is that the president acted criminally and extorted in the way a mob boss would extort somebody, a vulnerable foreign country,” Himes said on NBC’s “Meet the Press,” “it’s probably best not to use Latin words to explain it.”

Another Intelligence member, Rep. Eric Swalwell (D-Calif.) said on CBS’s “Face the Nation” that Democrats have “evidence of an extortion scheme using taxpayer dollars to ask a foreign government to investigate the president’s opponent.”

“And the Constitution is very clear: treason, bribery or acts of omission. In this case, it’s clearly one of those,” Speier said on ABC’s “This Week.”

All three lawmakers are allies of Speaker Nancy Pelosi (D-Calif.), though Pelosi has walked a fine line since announcing the impeachment inquiry in late September. She’s argued the importance of investigating allegations that Trump abused his office, while being careful to say Democrats haven’t yet reached any conclusions about whether his actions merit impeachment.

And not all Democrats on Capitol Hill are adopting the more direct extortion and bribery language. Some are concerned that Trump and his allies will easily parry allegations of those specific crimes by trumpeting simple claims that “no extortion” and “no bribery” took place.

“No collusion” became a familiar refrain from Trump during former special counsel Robert Mueller’s investigation into 2016 election interference, and the president has insisted there was “no quid pro quo” with Ukraine.

These Democrats believe their party needs to frame their impeachment inquiry in serious but more sweeping terms: Trump is trying to fix the presidential election and “cheat our democracy.”

“The original sin is that President Trump abused his power to try to rig the 2020 election to his advantage. How did he do it? He used the power of his office to withhold military aid to pressure Ukraine to manufacture dirt on his political rival,” said a Democratic leadership aide working on impeachment.

“Hurting our national security to help win elections is wrong, no matter what you call it. The president calls it ‘perfect’ and has shown us he will do it again,” the aide said.

Pelosi formally launched the impeachment inquiry following allegations by an anonymous government whistleblower that Trump had withheld U.S. military aid to Kyiv as leverage to secure a commitment from Ukrainian leaders to open anti-corruption investigations into the 2016 election and former Vice President Joe Biden, both of which could have helped Trump politically heading into the 2020 election.

Republicans have dismissed the notion that Trump’s request was out of bounds, arguing he was merely fighting to ensure taxpayer dollars were not misspent in a country long known for corruption. Such caution, they contend, is customary for executive agencies distributing aid abroad.

“The suspension of foreign aid, and the evaluation of that, is not a new thing,” Meadows said. “In fact, what we’re hearing … is this is part of a broader analysis of foreign aid in general in terms of what we should do. It wasn’t just Ukraine where the aid was held up.”

Democrats are leaning toward a different verdict, citing a number of other witnesses who testified to the veracity of the whistleblower complaint. For weeks, many Democrats have invoked the “quid pro quo” language — literally “this for that” — in accusing Trump of enlisting a foreign leader to influence a U.S. election.

That, however, is starting to change as Democrats prepare to stage two public hearings on the Ukraine affair this week. A key member of Pelosi’s leadership team, Assistant Speaker Ben Ray Luján (D-N.M.), said he completely agreed with Himes’s characterization of Trump’s activities as extortion.

“The president was engaged in an extortion in the same way that a mob boss would shake somebody down,” Luján said on MSNBC on Sunday night. “The corruption surrounding this is on full display. And we should call this for what it is.”

Laurence Tribe, professor of constitutional law at Harvard University, suggested the Democrats’ references to a quid pro quo were a tactical mistake for a party hoping to sway public sentiment. And he welcomed the shift to more clearly defined terms.

“It’s easier for the public to understand English-language concepts like ‘bribery’ and ‘extortion’ than it is for most people to plumb the meaning of the Latin phrase ‘quid pro quo,’ ” Tribe said Monday in an email, “and public comprehension is essential to the proper use of the impeachment power.”

Tribe, a frequent Trump critic, rattled off a host of additional reasons he thinks the more explicit terms will prove more effective for Democrats taking their impeachment case public.

Among them, the quid pro quo language “completely fails to capture what’s wrong about the behavior this president has undoubtedly engaged in,” Tribe said, while making it “much too easy” for Trump’s Republican allies “to claim that our government, speaking through the president, regularly imposes conditions on foreign assistance.”

The shifting rhetoric, Tribe added, also undercuts a key Republican argument — that Trump’s actions don’t rise to the level of impeachment — by borrowing language directly from the Constitution’s description of what merits a president’s removal: “treason, bribery, or other high crimes and misdemeanors.”

For Democrats, the evolving language may also provide some clue as to specific charges they’re eyeing as they weigh whether Trump’s dealings with Ukraine merit the drafting of impeachment articles.

House Intelligence Committee Chairman Adam Schiff (D-Calif.) has made clear that he’s already considering the White House’s refusal to cooperate in the probe to be evidence of obstruction of Congress, which stood as one of the impeachment articles against former President Nixon in 1974. Mueller’s report, which outlined 10 different episodes of potential obstruction of justice, could also guide such an article.

Democrats have virtually decided that Trump abused his power in pressing Ukraine to investigate political rivals — another of the potential articles. And many in the party have cited Trump’s various business interests as clear violations of the Constitution’s emoluments clause.

The change in rhetoric has not gone unnoticed by Intelligence Committee Republicans like Rep. Lee Zeldin (N.Y.). He argued that there was no extortion because Ukraine early on did not know the military aid was being withheld.

“Dems have a new word of the day: ‘extortion’. The shiny object of ‘quid pro quo’ totally fell apart on them,” Zeldin tweeted. “Same problem though w/their new shiny object: Ukraine didn’t know there was a hold on aid until just before it was lifted. They didn’t have to do anything to get it lifted.”