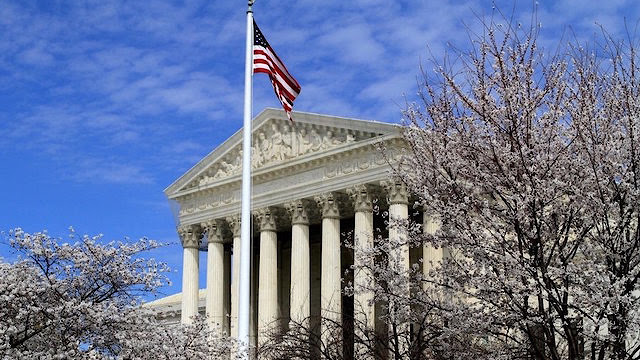 The Supreme Court on Tuesday will hear oral arguments over President Trump's move to end Obama-era protections for undocumented immigrants brought to the U.S. as children, in one of the most closely watched cases of its term.

The controversy over the Deferred Action for Childhood Arrivals (DACA) program is at the center of a two-year, contentious political fight between Democrats and Trump over immigration. And it presents high stakes for both parties and the court as the justices again review a controversial Trump policy.

A ruling could change the deportation status of nearly 700,000 people and is expected to come next summer, just months before the 2020 election.

The political stakes will be enormous. Trump has touted his actions on immigration to his base, while 2020 Democratic presidential contenders have made undoing those policies a centerpiece of their campaigns.

The anticipation for the rulings and the pressure on the court to weigh in has been high. Trump also sought to fast-track a review from the Supreme Court in 2018, but it wasn’t until this summer that the justices formally agreed to hear the case.

The justices have consolidated three separate cases over Trump's decision to wind down DACA and will consider two overlapping issues: whether courts have the power to review the Trump administration’s action and whether the president's decision to unwind the deportation-relief program is legal.

The DACA program, which former President Obama established through executive action in 2012, shields from deportation certain immigrants who came to the United States before age 16 and continue to live here illegally. The Obama administration justified its policy of nonenforcement for so-called Dreamers as an exercise of prosecutorial discretion.

Under DACA, applicants who meet various criteria, including education or military service requirements, and have no serious criminal record are eligible for a work permit, driver’s license and health insurance, as well as a renewable two-year reprieve from deportation. Roughly 660,000 people are currently enrolled.

Two years after the DACA launch, the Obama administration expanded the program to include more undocumented young people and certain parents of noncitizens. This DACA partner program, known as Deferred Action for Parents of Americans (DAPA), was eventually struck down in 2016 after a 4-4 Supreme Court tie left a lower court ruling against it in place.

As a presidential candidate, Trump vowed to “terminate” what he described as Obama’s “illegal executive amnesties.”

When the Trump administration announced plans in fall 2017 to rescind DACA, the move was met with a swift legal challenge.

The case before the Supreme Court stems from a lawsuit the University of California filed in federal court on behalf of its students. The district judge temporarily halted the DACA repeal while the case played out in court, and the 9th Circuit Court of Appeals upheld that ruling.

The Supreme Court has consolidated that case — Department of Homeland Security v. Regents of the University of California — with two other legal challenges to Trump’s DACA repeal that arose through federal courts in Washington, D.C., and New York. Judges in those cases also sided against the Trump administration.

The Supreme Court now faces thorny questions about how to interpret a federal statute that governs how much decisionmaking power federal agencies have.

Justices will be asked to look to the Administrative Procedure Act to determine if courts have the authority to review the DACA recision. They will also consider whether the administration’s move was legally justified, or if it was “arbitrary and capricious,” and thus illegal under the act.

The Trump administration argues that its decision to rescind DACA is not reviewable by courts. If they prevail on that argument, then the Supreme Court would vacate the lower courts’ rulings against the Trump policy.

If the justices find the Department of Homeland Security’s policy is reviewable, the question then turns to whether the agency’s decisionmaking process was legally sound. The administration argues it repealed DACA on a belief that it was unconstitutional and that it suffered from the same legal defects as the DACA expansion policy that was struck down.

The challengers say that the administration’s argument — that it lacks the legal authority to continue DACA — is invalid. They say the government has been providing similar deportation relief to different groups of immigrants for decades.

The eventual ruling will reverberate during an already heated presidential election.

Former Vice President Joe Biden, a 2020 contender, was in office when DACA was enacted.

"Dreamers ... are Americans," Biden said, using the term commonly used for DACA recipients, shortly after the court said it would hear the case. Biden urged lawmakers to quickly address the problem without waiting for a court ruling.

Polling has consistently shown that a majority of Americans support legal status for Dreamers. And immigration rights activists have mobilized in the wake of Trump's action. The case has also drawn the interest of American businesses, with prominent companies like Microsoft and Apple weighing in with briefs in support of the Dreamers.

The fight is likely to enter a new stage after the court's eventual ruling, with new pressure on Congress and the White House to address the status of Dreamers.

Trump has urged the justices to strike down the program, saying that could encourage lawmakers to negotiate with him on an immigration deal.

"If they do what is right and do not let ... DACA stand, with all of its negative legal implications, the Republicans and Democrats will have a DEAL to let them stay in our Country, in very short order," Trump tweeted last month. "It would actually benefit DACA, and be done the right way!"

But Trump and Republicans also see a ruling in their favor as a chance to seek more concessions on immigration from Democrats in exchange for protecting the Dreamers.

A number of Democratic presidential candidates also support a legislative fix but have criticized the Trump administration’s approach.