Can Jason Garrett save his job? 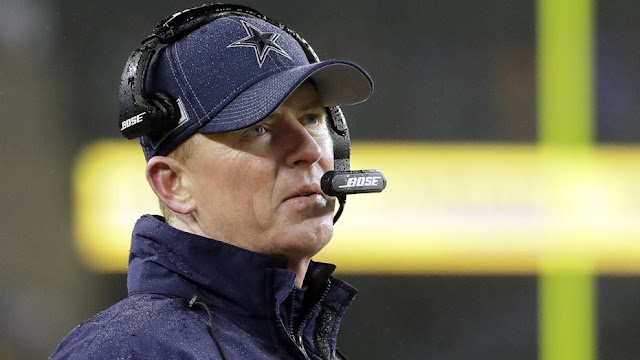 It looks like Jason Garrett is on the hot seat. Again.

Ho-hum. The Cowboys head coach has been on the hot seat for so long that his Dockers are charred. He's like Homer Simpson or (for you old-timers) George Jetson: always about to get fired before the second commercial break, but always surviving by the skin of his teeth in time to make the same mistakes in the next episode.

But this time, it's serious. The emperor was clearly not amused by Sunday's loss to the Patriots.

"With the makeup of this team, I shouldn't be this frustrated," Cowboys owner Jerry Jones told reporters after the game. "I don't think there's a game where a coaching staff couldn't do better."

Jerry had every right to be steamed after a loss in which:

• The special teams surrendered a blocked punt deep in their own territory, missed a field goal and barely avoided a near-disaster when they weren't ready to return a short kickoff. ("Special teams is a total reflection of coaching," Jones said, accurately.)

• The offense appeared unprepared to cope with cold, wet weather until the second half. And...

• Garrett kept settling for field goals near the goal line, a tactic which has proven fatal to Patriots opponents for roughly 19 years.

The only thing shocking about Jerry's mounting exasperation with Garrett is that it took nine years and 12 weeks for Caesar to finally issue a long-overdue thumbs down.

Sunday's loss was much like the Cowboys' Week 10 loss to the Vikings. Garrett grew bizarrely conservative after the Cowboys drove to the 11-yard line while trailing by four points at the end of that game, handing off twice while the clock ticked away, then confusing return man Tavon Austin into calling for a fair catch on the following punt when he had a half-mile to run in front of him.

Before that, there was the Jets loss in Week 6. Ezekiel Elliott got stuffed on 4th-and-2 in the red zone in the second quarter, the Jets took a 14-3 lead on a 92-yard bomb on the next play, and Garrett appeared to have no plan for staging a comeback against a vastly inferior opponent.

Before that were the Packers and Saints losses, which established the Cowboys as second-fiddle contenders and sealed the entrances to numerous playoff-seeding tiebreakers.

According to Football Outsiders' estimated wins metric, the Cowboys should have entered Sunday with 8.9 wins based on their statistics. Instead, they are now 6-5 and remain only one game up in the NFC East on the Eagles, a team whose offense is so bad right now that it cannot be trusted with safety scissors.

That lead is not safe at all. The Eagles have a creampuff schedule down the stretch, with the Giants twice, Washington and the Dolphins, plus a rematch with the Cowboys at home. The Cowboys, meanwhile, face the 8-3 Bills on Thursday, followed by three fellow NFC middleweights: the Bears, Rams and those Eagles.

The disaster potential in Dallas has reached extinction level. And if the Cowboys bungle their way out of the playoffs this time, Garrett won't be able to save his job. Even one of his patented toe-dips into the postseason probably won't save him. And frankly, it shouldn't.

The latest round of Garrett hot-seat speculation began hours before Sunday's game against the Patriots. NFL Network's Ian Rapoport reported that Garrett and the Giants share a mutual interest if the Cowboys fire him and the Giants part ways with head coach Pat Shurmur.

Most coaches would be safe from such speculation hours before a big game when their team leads its division and is coming off a playoff victory. But Garrett isn't fooling anyone by producing 10-win seasons with 12-win talent anymore, and he has run out of benefits of the doubt.

In the past, Garrett has accomplished just enough to justify his retention (see: last year), or could blame injuries for a 4-12 finish (see: 2015). In other seasons, Jerrah seemingly wasn't impressed with the inventory on the end-of-season coaching carousel and decided to stick with his dutiful yes-man instead.

But former teammate Troy Aikman ripped Garrett's play-calling and special teams miscues during Sunday's telecast. Three decades of loyalty to the organization can no longer shield Garrett from criticism. The roster is relatively healthy, and the NFC East is horrendous, so there's no hiding from the fact that a lack of play-calling aggressiveness and attention to detail are two of the Cowboys' biggest problems right now.

Garrett remains employed because he follows orders and doesn't strive for personnel-level power. He's supposed to be detail-oriented (special teams miscues and mid-game quarterback wardrobe changes notwithstanding), and he manages the egos above and below him on the org chart very well.

Jerry isn't the only NFL decision-maker who values those head-coaching soft skills more than game-planning creativity or dynamic leadership, which is why the Giants or some other old-fashioned franchise would indeed gobble Garrett up if (when) he reaches the job market. He is a capable middle manager, which is why he produces middling results. The NFL runs on his type of middle-of-the-pack mindset. But most coaches of his caliber survive for only three or four years before getting swapped out for a similar model, not a full decade.

The Cowboys host a Bills team Thursday that is 8-3 thanks to a cushy schedule and a disciplined, physical style of football. That's the kind of team Garrett's Cowboys are supposed to be, except they are far more talented. That's why they should be coasting toward a first-round playoff bye, not fretting over whether the Eagles can get their act together enough to beat the Giants and Dolphins.

The Cowboys are 4-5 on Thanksgiving under Garrett's watch, with blowout losses to the Eagles, Panthers and Chargers in recent years. A loss like that to the Bills, in Jones' own palace on what he considers the National Feast Day for Cowboys football, would probably be the last straw for Jerrah.

No matter what happens Thursday, there's also a chance that the Cowboys will stumble into the playoffs with a 9-7 record and Jerry will once again get selective amnesia about all of the 28-yard field goals, special teams gaffes and squandered opportunities that defined this season.

If that's the case, at least Giants fans won't have to worry about Garrett coming to the Meadowlands. And we can meet again this time next year for another "Garrett on the hot seat" column.