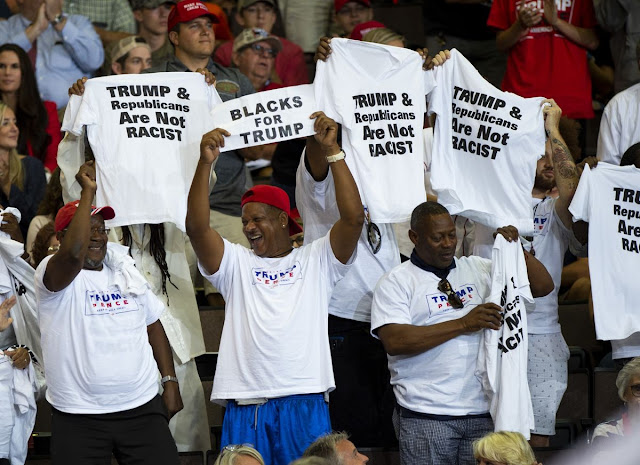 President Donald Trump is pitching his record to African-American voters on Friday in Atlanta, Georgia, where he will join Vice President Mike Pence to kick off the launch of the "Black Voices for Trump" coalition a year out from the 2020 election.

The president will speak at the World Congress Center in Atlanta to build support with a group of voters with whom he is deeply unpopular. Only 8% of African Americans cast their ballot for Trump in 2016 while his approval rating among black voters sits at just 10%, according to a recent survey by Quinnipiac University

Not all African Americans are dismissing Trump. The Atlanta event drew a few hundred African American supporters, many wearing red and Make America Great Again hats, with the line stretching through the lobby of the World Congress Center. Some cheered with excitement and some brought their children to witness the announcement.

The Miami-based group "Blacks for Trump" traveled to Atlanta Friday to support the launch of the coalition. Lateresa Jones, a member of the group, said African Americans should not feel afraid to voice support for Trump.

“We have been allowing ourselves to be ignored politically,” said Jones, who was wearing a ‘Blacks for Trump’ T-shirt and a red jacket. “Our president has an urban agenda that will grow every urban community across the country.”

Outside the Atlanta event, hundreds of protesters gathered at nearby Centennial Park before marching toward the World Congress Center.

Trump has boasted about his confidence in African American support in recent weeks.

"I think that I’m going to get a tremendous percentage of votes from the African Americans," Trump told reporters Sunday on the South Lawn of the White House.

He touted "the best unemployment numbers in the history of our country for African Americans" and his administration's action on criminal justice reform.

"Without me, you don't have criminal justice reform. And that was for African Americans more than anybody else. So I think my standing in the African American community is maybe the best," he added.

That's the argument the campaign will make to the African Americans with the aim of peeling off black support in a few key states, like Wisconsin and Pennsylvania, where Trump won by razor-thin margins in 2016.

The president has made other overtures to the black community in recent months. Last month he spoke at the historically black Benedict College in Columbia, South Carolina, in what was billed as a keynote speech at a three-day presidential forum on criminal justice reform that featured some of his Democratic challengers.

But instead, Trump's speech came a day before the other candidates appeared and was delivered to a handpicked crowd of supporters and just seven students. He was honored for the bipartisan passage of the First Step Act, which gives elderly inmates opportunities for release, increases the amount of good-time credit inmates can receive and assists with their transition back into society. His award prompted Democratic presidential candidate Kamala Harris to pull out of the event Saturday.

Trump also hosted the Young Black Leadership Summit, an event organized by the conservative group Turning Point USA, at the White House Oct. 4 In September, he spoke to leaders from historically black colleges and universities at an annual conference in Washington, where he announced faith-based HBCUs would no longer be restricted from federal funding for capital projects.

Trump has often touted the record-low unemployment rate among African Americans. When he took office in January 2017, the black jobless rate was 7.7% and has since fallen to 5.4% – the lowest on record dating to 1972.

But the president has drawn criticism over what some see as racially divisive language, most recently in clashes with the late House Oversight Chairman Elijah Cummings. Trump referred to his black-majority district in Baltimore as a "disgusting" and "rodent-infested mess." He also criticized four freshman congresswomen of color known as "The Squad." He initially attacked Reps. Alexandra Ocasio-Cortez (D-NY), Rashida Tlaib (D-MI), Ayanna Pressley (D-MA), and Ilhan Omar (D-MN), before zeroing in on Omar, who was born in Somalia but is a U.S. citizen. The spat intensified after supporters chanted "send her back" at one of his campaign rallies in North Carolina in July.

Trump often boasts that he outperformed former Republican presidential nominee Mitt Romney, who received just 6% among African American voters in 2012. But Theodore Johnson, a senior fellow at the Brennan Center for Justice who focuses on race and politics, points out he was running against the first black president, Barack Obama, who received 93% of the black vote.

"He actually fared worse than every other Republican presidential candidate that didn't run against a black man since [Barry] Goldwater in 1964," Johnson said. Goldwater took 4% of the African American vote.

Johnson isn't convinced that the coalition or any of the president's efforts among the African American community are aimed at expanding his appeal, but keeping the slice of black voters he does have in place.

"When he talks about unemployment numbers, when he talks about criminal justice reform and visits HBCUs, this is just to hold on to that 8% of those folks that he does have, in particular black men," Johnson said.

"He gives just enough to show that they care, to some extent, about the black American experience by pointing to these policy wins, but the bigger thing is to cast doubt on whoever the Democrats put forth," he said.

Johnson noted that black voter turnout dropped by seven points from 2012 to 2016. If turnout among black voters falls short in 2020, Trump would benefit. Every Democratic presidential candidate has received no less than 82% of the African-American vote since 1972.

Yahanesh “YG Nyghtstorm” George, vice chairman of the Forsyth County GOP, said he supports Trump’s outreach to black voters in Atlanta because too often Democrats take the black vote for granted. Many presidential candidates, he said, skip campaigning in Atlanta.

“It’s another example of him showing that he is trying to appeal to American citizens period, he’s trying to talk to everybody,” said George, adding that he was pleased with the country’s low unemployment rate.