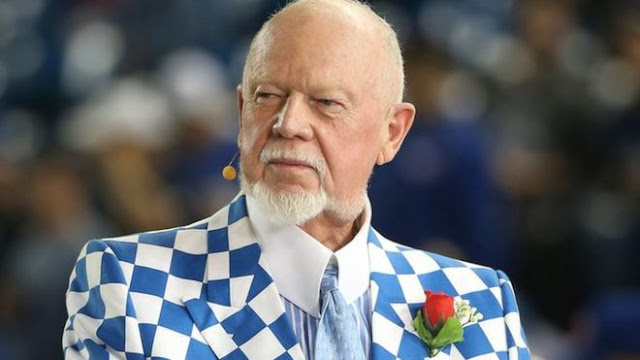 If Justin Trudeau can be forgiven for his habit of wearing blackface, why can’t Don Cherry be forgiven for a ham-fisted rant on patriotism? I think there is a similar point to be made about speech in general.

The immensely popular Cherry, now 85, has long been known as champion of traditional “Canadian” hockey, by which he means hockey that features hitting and fighting. Cherry, who does a tremendous amount of charity work for kids and veterans, has spent years deliberately tweaking the sensibilities of the habitually offended. He’s the kind of old-timer who still calls liberals “left-wing pinkos” and environmentalists “cuckaloos.”

And all of that finally caught up to him this week when he was fired by Sportsnet, Canada’s leading sports network, for singingly out immigrants as “you people” in a rant about the lack of red poppy pins, which Canadians — or, at least, a dwindling number thereof — wear on Remembrance Day to symbolize the sacrifices of their armed forces.  At one point, Cherry says:

The network quickly apologized on air for Cherry’s “hurtful” comments — “hurtful” being a modern euphemism for “offensive.” “You people” is an undeniably crude way to refer to your fellow citizens. But immigrants aren’t brittle creatures who have to be shielded from open discourse. Cherry’s rant was a plea for patriotic participation and communality, not a plea to keep immigrants out of Canada. As far as I can tell, he wasn’t even exclusively singling out immigrants. He began by grousing about his neighbors in Mississauga. His point was that rural Canadians show far more patriotism than urban Canadians, which may or may not be true.

Even if viewers were hurt, though, rather than terminate a 40-year career over a single boorish phrase, wouldn’t it have been more productive and entertaining to bring on a Canadian immigrant — maybe even a player — to debate Cherry on the meaning of patriotism, and perhaps the significance of the declining support for veterans?

I don’t mean to overstate the importance of Cherry’s firing — we’re talking about an octogenarian ranting about pins, after all — but every time we bury someone who offends a few thousand people on social media we set a new destructive precedent. None of these personalities has a right to be on TV, of course, and there are limits, but allowing manufactured outrage to dictate the contours of debate is dangerous trend.