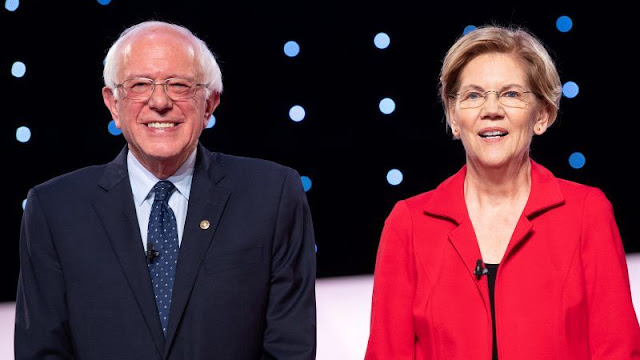 In Democratic presidential debate after debate, we are treated to a long list of programs the candidates would like to provide Americans with for free. For the most part, they are less eager to talk about those programs’ trillion-dollar price tags.

These numbers are not new, but they bear repeating. One of the front-runners, Sen. Elizabeth Warren (D-Mass.), touts proposals that seem to add up to roughly $49 trillion over the next decade. Another, Sen. Bernie Sanders (I-Vt.) would spend more like $97.5 trillion. Warren would focus on programs like “Medicare for All,” free college and other new entitlements. Sanders would add to that a job guarantee program. Apparently, free stuff is expensive.

Everyone knows – or should know – that these numbers would add to the spending the federal government has already committed to without having the money to pay for it. As Brian Riedl at the Manhattan Institute calculated, before you add in any of the Sanders/Warren spending, we already face a $15.5 trillion baseline deficit.

So far, neither of these two candidates has proposed a way to pay for these new programs entirely. Sanders has a list of roughly $23 trillion in new taxes that could be used – generating far less than his $97 trillion in spending – but at least he admits that new taxes on the middle class would be required. Warren, so far, has insisted that she would need to tax only the uber rich.

That’s simply impossible. As Howard Gleckman, a senior fellow at the Urban-Brookings Tax Policy Center, told the Los Angeles Times back in May, “These big, ambitious proposals are so expensive, it is not possible to pay for them by just taxing the rich,” … “They are going to require taxing middle income people…. But talking about that just doesn’t fly politically.”

And yet, Warren continues to claim the super-rich will pick up the tab, and them alone. For instance, when pressed about the fact that her wealth tax proposal pays for only $2.75 trillion of the $49 trillion in new spending, she raised the proposed wealth rate on asset billionaires from 3 percent to 6 percent, which supposedly will up the revenue to $3.75 trillion over ten years. Such speedy doubling of the wealth tax rate should worry those of us who believe that once it’s in place, it will soon be extended to more people with lesser wealth.

Besides, there are other reasons to be skeptical about such a levy’s ability to raise $3.75 trillion. For one thing, the projections rely on overly optimistic assumptions about tax avoidance. In addition, the inability to raise substantial wealth tax revenue is why close to a dozen European governments have dropped the tax altogether since the 1990s. In France, around 200 billion Euros were lost in capital flight every year — about double what the tax actually raised.

Warren claims her wealth tax proposal will raise 1.4 percent of GDP, but once again, that’s wishful thinking. As the Cato Institute’s Chris Edwards calculated, the average of the dozen wealth taxes in Europe raised a tiny 0.2 percent GDP in revenue. The bottom line is that wealth taxes underperform.

There’s an even more troubling lesson from the European wealth tax experiments: They create disincentives to produce more wealth or invest, which have serious spillover effects for people within much lower wealth and income groups. The main reason is that the wealth that Warren wants to tax is not stored in the form of yachts and oversized checking accounts (even though there is some of that going on). A vast share is in capital and business assets.

As Edwards once explained, “The wealth of the richest man in the world, Jeff Bezos, is not gold bars hidden under his mattress. Rather it is that his 12 percent ownership stake in Amazon.com, a company that employs more than 600,000 people, creates a platform for many other businesses, and saves consumers a huge amount of money.” A significant wealth tax applied to these assets will have consequences for the workers who count on it for employment and more.

The bottom line is that, as much as vast swaths of Americans want what Warren and Sanders are offering, we still have no clue how they will pay for it.