With a lame-duck speaker, Texas House confronts the work of the interim 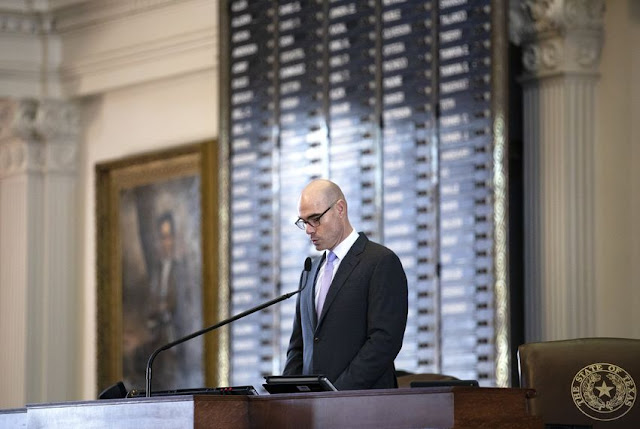 By Emma Platoff and Alexa Ura

The Texas House may have been in turmoil on Tuesday — reeling from the news that its once-revered leader, Dennis Bonnen, would relinquish the seat he’s represented since 1997 and with it the speaker’s gavel — but in Houston, urgent business continued apace.

In the student services building at Lone Star College, state Rep. Phil King gaveled in the Texas House Redistricting Committee for the fifth of more than two dozen hearings the Weatherford Republican plans to convene across the state between now and the 2021 legislative session.

“Our path is plotted and everything is in great shape,” King said in an interview before the hearing. The message was clear: Bonnen drama or no, the Legislature’s work continues.

The disruption to House leadership comes during the 18-month gap between Texas’ biennial 140-day legislative sessions — typically a lull in the governing process when committees set off to complete studies for future legislation and most lawmakers return to their districts to secure their reelection. For the speaker, that interim period involves working with the governor and lieutenant governor on executive budgeting decisions, directing the work of legislative committees like the redistricting panel and helping his colleagues win reelection, usually with a hefty campaign account.

This year, the early months of the interim have been dominated by political scandal: Bonnen, once supported by a deep bench of lawmakers on both sides of the aisle, asked a hardline conservative activist to target members of his own party in exchange for long-sought media credentials to the Texas House — a meeting that proved fatal to his leadership after dozens of House Republicans called on him to step aside.

Lame-duck speakers have led the lower chamber through interim periods before, but this time the awkward situation was precipitated by political revolt. For the next 14 months, assuming there is no further shakeup in House leadership structure, the same powerful committee chairmen who called for Bonnen to step down will be asked to carry out his will for their committees — and every decision the speaker makes will be viewed in the shadow of his fatal politicking.

Would more get done under a scandal-free speaker?

“In reality, the House kind of runs itself in the interim,” said King, who called for Bonnen’s resignation on Monday night. “We’ve got a longstanding system in place and everyone knows what needs to be done.”

To King, the interim redistricting work amounts to “almost a full time job” to get the House in the best position to redraw political boundaries in 2021 to account for the state’s explosive population growth. It’s a typically a politically contentious and drawn-out process on which the next decade of Texas politics depends. And the interim work includes hearing from communities and local officials about their ideal districts and, eventually, corralling requests from lawmakers and interest groups about how the state’s power should be distributed.

But the turmoil surrounding the speaker’s departure is injecting some uncertainty into a committee assignment King and other lawmakers expected would carry through the next legislative session: Now, it’s even more uncertain whether all 15 members of the committee doing the work in the interim will be back when a new speaker is selected in January 2021.

King was confident that his committee will continue its critical work, but not all of his House colleagues shared that optimism.

“I take no joy in a crisis of leadership because it’s not just a political insiders’ game: It distracts and detracts from progress on issues Texans care about,” said state Rep. Joe Moody, an El Paso Democrat who serves in the ceremonial position of speaker pro tempore and has been among Bonnen’s top Democratic allies.

Bonnen’s office did not return requests for comment for this story.

Questions about Bonnen’s future at the helm of the House have roiled the chamber for months already. Some had called on him to resign immediately, an event that would have set off a more urgent scramble for the gavel — with legally murky waters about how succession works in the House without the governor calling a special session for a new election — and, perhaps, a more pressing crisis for the House’s interim business.

That work includes much more than the once-a-decade redistricting process. Budget leaders spend the 18 off-months preparing the one bill the Legislature must pass every two years: the state’s budget, which this year topped $200 billion.

That process may prove especially challenging this year without the leadership of John Zerwas, the longtime House member and chair of the budget-writing Appropriations Committee, who announced earlier this year that he would not seek reelection. His seat in the House will be filled in a Nov. 5 special election, but his post at the helm of that committee is vacant, and only Bonnen can fill it. For that critical chairmanship, he will have to choose either a member who called for him to resign — who might ignore his directives or worse — or a member who stayed silent — who might spark charges of unreasonable favoritism.

After three special elections next month, there will soon be three new members of the Texas House. Typically, new members receive committee assignments immediately so they can join in the work of the House during the interim period. Those assignments, too, would have to come from Bonnen.

And what will the members of those committees focus on for the next 14 months? Only the speaker can issue the charges that guide House committees’ work during that time. Those orders typically come in the fall or winter. Lawmakers have yet to receive those directives either from Bonnen or from Lt. Gov. Dan Patrick in the Senate. And once they do, it’s not clear what incentive lawmakers will have to heed Bonnen’s orders.

“I assume we’re going to see an even further delay in the interim charges as we work through this, so that’s a concern. … I do think you might lose the focus of what the body as a whole has said they want to be looking at,” said state Rep. Donna Howard, D-Austin. Of particular concern, she said, will be crafting a budget that can maintain an expensive 2019 reform that pumped billions into public education and trimmed property taxes.

“I’m concerned about that moving forward without Chairman Zerwas and without Speaker Bonnen being in a position to provide as much assistance as he would normally be able to do,” she said.

Interim tasks that ranked as mid-level priorities may end up forgotten amid the flap. An interim commission to study judicial selection reform — four members of which were to be appointed by the speaker — has yet to come together, for example.

To be sure, it’s not unusual for the House to pass an interim with a lame-duck speaker. In 1992, after pleading no contest to two misdemeanor ethics charges and declaring he would not run for reelection, Texas House Speaker Gib Lewis presided over a special session.

And two years ago almost to the day, longtime House Speaker Joe Straus announced that he would not seek reelection to the Legislature’s lower chamber. The work of committees continued unabated — but the path may have been smoother under less dramatic circumstances.

“The certainty of [Straus’] reasons for leaving and the goodwill he had built up with the members made for an easy and productive transition,” said Chris Griesel, who served as House Parliamentarian under Straus.