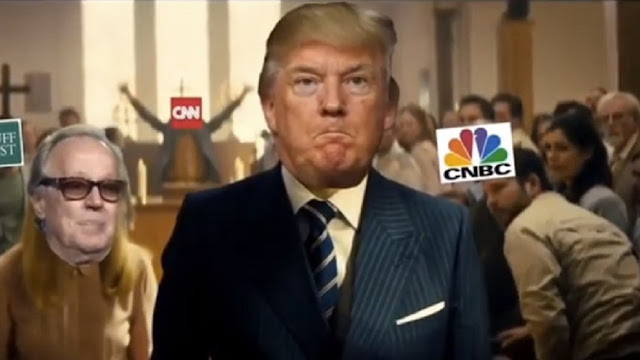 The White House is condemning a video that surfaced over the weekend showing a superimposed picture of President Trump shooting members of the media and his political foes, though the president had yet to personally weigh in as of Monday afternoon.

White House press secretary Stephanie Grisham issued a tweet Monday morning saying Trump had not yet seen the video “but based upon everything he has heard, he strongly condemns this video.” It was not clear if Trump had watched the video as of Monday afternoon.

Trump has no public events on his schedule for Monday, a federal holiday, but is grappling with the fallout of Turkey’s offensive in northern Syria.

Trump tweeted about various issues throughout the morning and early afternoon hours, including about forthcoming sanctions on Turkey, his former press secretary Sean Spicer and Hunter Biden.

The video, which has circulated online since The New York Times first reported on it over the weekend, is an altered clip from the film "Kingsman: The Secret Service." It shows a person with Trump’s head superimposed on his body gunning down and stabbing people with the faces of his political foes and media organizations’ logos superimposed onto them in a “Church of Fake News.”

The video was reportedly shown at a conservative conference held at Trump’s National Doral golf resort in Miami, Fla.

Among the attendees at the conference was Donald Trump Jr., who condemned the clip through a spokesman.

"Don hasn't seen the video and was unaware of its existence until the recent media reports about it, but he strongly condemns the type of disgusting and graphic violence purported to be depicted in the video against members of the media,” the spokesman said Monday.

The video has invited strong backlash from media organizations and political figures, including a number of Democrats whose districts have been affected by mass shootings.

The White House Correspondents’ Association (WHCA) called on Trump to announce the video in a statement late Sunday, describing it as horrifying.

"All Americans should condemn this depiction of violence directed toward journalists and the President’s political opponents,” WHCA President Jon Karl said.

"We have previously told the President his rhetoric could incite violence," he continued. "Now we call on him and everybody associated with this conference to denounce this video and affirm that violence has no place in our society."

The conference host and pro-Trump group American Priority issued a statement on Sunday saying the video was not approved or viewed by the conference organizers and that they only became aware of it upon being contacted by the Times. The group said it “always has and always will condemn political violence.”

Trump has derided the media throughout his presidency derided the media, labeling coverage he dislikes "fake news" and describing certain organizations as the "enemy of the people." He regularly points out reporters in the room at his rallies, whipping his supporters into a frenzy.

He has continued hammering the press despite those in the industry and in Congress warning that it could lead to violence, and even after one of his supporters mailed explosive devices to CNN and some of the president's prominent critics.