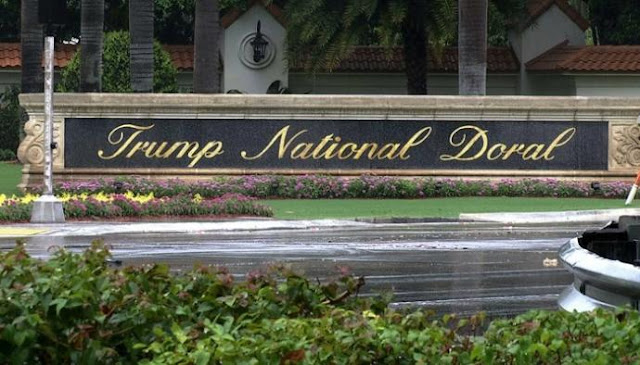 A fake video of President Trump shooting, stabbing and brutally assaulting media personalities and political opponents was played at a conference for his supporters at his Miami resort last week, The New York Times reported Sunday.

Sanders and a person close to Trump Jr. told the Times that neither one saw the video.

White House press secretary Stephanie Grisham tweeted Monday morning that Trump had not yet seen the video, but would watch it shortly.

"But based upon everything he has heard he strongly condemns the video," Grisham tweeted.

The video obtained by the Times also features the logo for Trump’s reelection campaign.

One portion reportedly shows Trump’s head superimposed on the body of a man opening fire at people who have the faces of his critics or the logos of media organizations superimposed on bodies inside the “Church of Fake News."

The clip appears to be lifted from the 2014 dark comedy film “Kingsman: The Secret Service.”

The event's organizer told the Times that the clip had been played at the conference, saying it was part of a “meme exhibit.” He denounced the video and said his organization was looking into how it was shown at the event.

“Content was submitted by third parties and was not associated with or endorsed by the conference in any official capacity,” Alex Phillips said. “American Priority rejects all political violence and aims to promote a healthy dialogue about the preservation of free speech. This matter is under review.”

Trump campaign communications director Tim Murtaugh told The Hill that the "video was not produced by the campaign, and we do not condone violence.”

Jonathan Karl, president of the White House Correspondents’ Association, released a statement on Sunday night calling on Trump and others associated with the event to condemn the video.

"The WHCA is horrified by a video reportedly shown over the weekend at a political conference organized by the President’s supporters at the Trump National Doral in Miami," Karl said. "All Americans should condemn this depiction of violence directed toward journalists and the President’s political opponents. We have previously told the President his rhetoric could incite violence. Now we call on him and everybody associated with this conference to denounce this video and affirm that violence has no place in our society."