US economy grew at 1.9 percent in third quarter 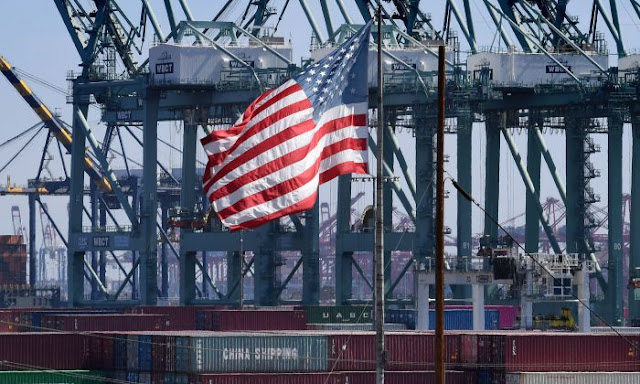 The U.S. economy grew at an annualized rate of 1.9 percent in the third quarter of 2019, upending expectations of a sharp slowdown driven by a global economic slump and the rising costs of trade tensions.

While 1.9 percent is far below the 3 percent growth rate President Trump promised during his 2016 campaign, economists had largely projected GDP growth to slump as low as 1.3 percent.
Trump touted “The Greatest Economy in American History!” in a tweet less than an hour before the highly protected GDP data was released.

Trump is counting on the economy to help him win a second term in next year's election. Trump's approval ratings are well below 50 percent, presidential head-to-head polls show him behind the major Democratic contenders for the White House and he is facing a bruising impeachment fight.

While Wednesday's figures do not meet the projections promised by Trump, they are likely to continue to soothe fears about a recession that has been stirred up over the summer as growth turned negative in several European countries, turmoil struck the bond market and the U.S. and China drastically escalated their damaging trade war.

The threat of a messy no-deal exit from the European Union by Great Britain and several geopolitical crises unfolding across the Middle East, South America and East Asia have also posed threats to financial stability.

But steady consumer and federal spending between July and September and a rebound in exports helped power the U.S. economy through a steep decline in business investment.

Consumer spending, which powers 70 percent of the economy, grew at a solid rate of 2.9 percent in the third quarter, though well below a 4.6 percent spike in the second quarter. Federal spending also grew 3.4 percent, moderating from an 8.3 percent surge in the second quarter following the government shutdown at the beginning of the year.

Even so, business investment in structures and equipment continued to decline, reflecting an ongoing U.S. manufacturing recession and the unwillingness of businesses to expand amid global economic tensions.