Trump urges GOP to defend him 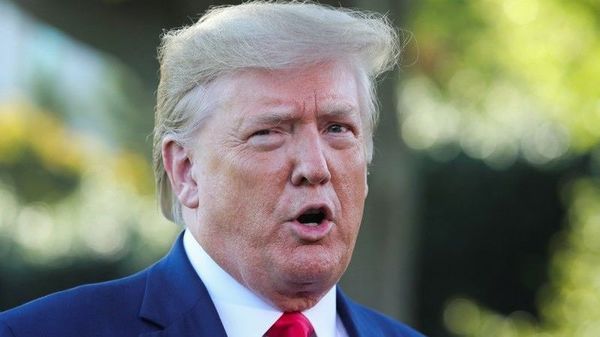 President Trump on Monday urged Republicans to offer him a tougher defense on impeachment amid a few signs of GOP discontent with his administration.

At a Cabinet meeting, Trump praised Democratic unity while criticizing his own party for not sticking together.

"The two things they have: They’re vicious and they stick together," he said of Democrats. "They don’t have Mitt Romney in their midst. They don’t have people like that."

Trump said Republicans have to "get tougher and fight" to counteract Democrats pursuing an impeachment inquiry.

"I watched a couple of people on television today. They were talking about what a phony deal it is. What a phony investigation it is," Trump said during the Cabinet meeting, dismissing allegations that he's abused his office.

Asked later to elaborate on his desire to see Republicans get tougher, Trump said he felt Democrats were "vicious."

Trump added that so-called "Never Trump" Republicans "might be worse than the Democrats."

"The good news is they're dying off fast," he said.

Republicans have largely defended Trump against the impeachment inquiry, but many have ripped him over the last two weeks for his decision to withdraw U.S. troops from northern Syria.

The House in a broad, bipartisan vote last week rebuked Trump for the decision, which led to a Turkish invasion against Kurdish forces that had been allied with the U.S. in the fight against terrorism. Only 60 Republicans voted against it.

Republicans also voiced discontent with Trump's decision to announce his Doral, Fla., resort would host the Group of Seven leaders meeting next year, a move that Democrats said could enrich the president. Trump, in a surprise move, reversed that decision on Saturday. Observers suggested the GOP criticism played a role in the change.

None of this makes GOP support for Democrats on impeachment remotely likely, but Trump can't afford to have a number of fights with his own party as he looks to them for help in the impeachment battle.

A few GOP lawmakers have withheld judgment and refused to say whether they believe Trump committed an impeachable offense.

Among them are Utah Senator Romney and Rep. Francis Rooney (R-Fla.), the latter of which announced over the weekend he would retire at the end of his term.

Romney has been among the most outspoken critics of Trump from within the GOP, calling the president's calls for Ukraine and China to investigate the Bidens "appalling."

Democrats are pursuing allegations that Trump abused his office by pressuring a foreign government to investigate his domestic political rival. They are specifically focused on a July 25 call between Trump and Ukrainian President Volodymyr Zelensky in which Trump urged Zelensky to "look into" Democratic presidential candidate Joe Biden.

White House acting chief of staff Mick Mulvaney last week said aid for Ukraine was not tied to the Bidens, but to an investigation of Democrats involved in the 2016 election. He later walked those remarks back.

Trump was asked Monday if he felt it was a foregone conclusion that Democrats will impeach him, and seemed to suggest he thought that might be the case.

"I think they want to," he said. "Any Democrat wants to because they're not gong to beat me in the election. So of course they want to impeach."

Trump called the investigation into him "illegitimate."

"It cannot be the way our founders, our great founders, meant this to be," he said.