Trump: Turkish offensive in Syria is 'not our problem' 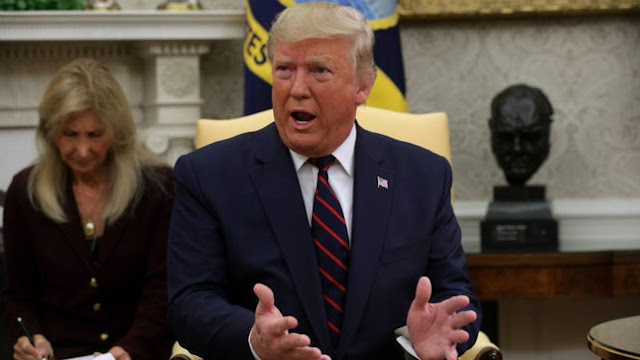 President Trump said Wednesday that Turkey’s offensive against U.S.-allied Kurdish forces in northern Syria is “not our problem,” defending his decision to withdraw U.S. troops from the region amid criticism.

"If Turkey goes into Syria, it is between Turkey and Syria. It’s not our problem,” Trump told reporters in the Oval Office during a meeting with Italian President Sergio Mattarella.

Trump also downplayed the U.S. alliance with the Kurds, calling them “no angels” and saying the U.S. “paid a lot of money” for the Syrian Kurdish forces to fight alongside U.S. troops against ISIS.

Trump’s remarks came as a U.S. delegation led by Vice President Mike Pence prepared to meet with Turkish President Recep Tayyip Erdoğan in Ankara in an attempt to broker a ceasefire in the region.

“The Kurds are much safer right now, but the Kurds know how to fight, and as I said, they’re not angels. They’re not angels. You take a look… but they fought with us. We paid a lot of money for them to fight with us, and that’s OK,” Trump said Wednesday in the Oval Office.

Trump has faced tremendous blowback over his decision to withdraw U.S. troops from northern Syria as Turkey prepared to launch a military operation at the border, including harsh criticism from some of his Republican allies.

His remarks Wednesday drew immediate and fierce criticism from Sen. Lindsey Graham (R-S.C.), one of his closest Capitol Hill allies.

“I firmly believe that if President Trump continues to make such statements this will be a disaster worse than President Obama’s decision to leave Iraq,” Graham tweeted.

“I fear this is a complete and utter national security disaster in the making and I hope President Trump will adjust his thinking,” Graham also wrote.

Many critics have argued that Trump’s move effectively greenlit Ankara's operation and that the president abandoned Kurdish forces, a key U.S. ally in the fight against ISIS. Turkey has long viewed the Syrian Kurds as a terrorist group.

The decision has also raised concerns about the potential for large numbers of ISIS fighters detained in the region to be released, undoing much of the work by U.S. and other forces to contain the terror group.

Administration officials have rejected the notion that Trump’s decision to pull back troops paved the way for the Turkish operation.

Trump has continued to defend his decision, saying he wants to get the U.S. out of “endless wars.” On Monday, he also announced sanctions on Turkey.

Trump also asserted that the situation on the Turkish border with Syria was “strategically brilliant” for the United States, pointing to the fact that the Kurds had struck a deal with Syrian President Bashar al-Assad for protection.

"So I view the situation on the Turkish border with Syria to be, for the United States, strategically brilliant. Our soldiers are out of there. Our soldiers are totally safe. They’ve got to work it out… Syria’s protecting the Kurds, that’s good. And by the way, every player hates ISIS,” Trump said.

Trump also at one point suggested that some ISIS fighters in the region had been released for “effect” to force the U.S. to return to the region.

Pence is traveling with Pompeo and Trump’s new national security adviser, Robert O’Brien, to Ankara to meet with Erdoğan on Thursday in an attempt to broker a ceasefire in the region. The visit comes after Trump held a phone call with Erdoğan earlier in the week.

“We’re watching and we’re negotiating and we’re trying to get Turkey to do the right thing,” Trump told reporters on Wednesday.

Meanwhile, Erdoğan rejected the call for a ceasefire before Thursday’s meeting.

Tensions between Trump and Republicans had shown signs of easing following the announcement of sanctions and the ceasefire efforts. Graham has supported Trump’s efforts on sanctions and a potential ceasefire.