Trump on Turkey cease-fire: 'Sometimes you have to let them fight' 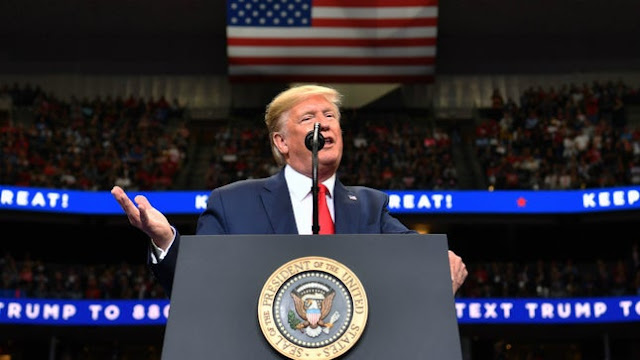 "Sometimes you have to let them fight," Trump told supporters at the American Airlines Center, referring to Turkish and Kurdish forces.

"Like two kids in a lot, then you pull them apart," Trump said.

Trump continued, saying that after Turkish and Kurdish forces "fought for a few days," that "we went there and we said, ‘we want a pause.’"

Additionally, Trump referred to both sides as a "friend." Turkey is a fellow NATO ally of the U.S., and the Kurdish forces known as the YPG were vital in the fight against ISIS.

"President Erdoğan was a gentleman, he understood," Trump noted. "But without a little tough love … they would’ve never made this deal.”

The deal that was officially reached between the U.S. and Turkey creates a 120-hour, or five day, cease-fire. During this time, Kurdish forces are supposed to move out of Erdoğan's desired "safe zone" — where he wants to relocate the estimated two million Syrian refugees who are in Turkey.

In return, Trump said that he would lift the economic sanctions that he placed on Turkey earlier in the week.

Trump also promised to recapture ISIS operatives and their families who reportedly escaped during the fighting between Turkey and the Kurds.

The president's speech came after top congressional Democrats lambasted him earlier Thursday for the ceasefire.

"The President’s decision to reverse sanctions against Turkey for brutally attacking our Kurdish partners in exchange for a sham ceasefire seriously undermines the credibility of America’s foreign policy and sends a dangerous message to our allies and adversaries alike that our word cannot be trusted," the duo added.