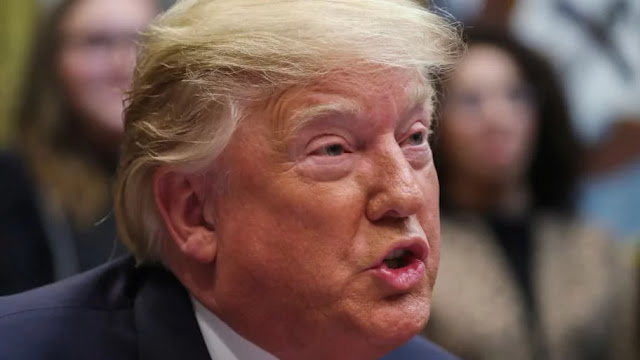 President Trump triggered a wave of outrage on Tuesday by comparing House Democrats’ ongoing impeachment inquiry to a lynching, drawing rebukes from prominent black lawmakers and a call from at least one Republican to retract the comment.

Trump’s rhetoric on the Democrats' investigation has grown increasingly hostile in recent weeks as he lobs attacks at his political opponents and decries the process as “illegitimate," “bullshit" and a "coup."

But his invocation of a term associated with extrajudicial mob killings of African Americans was particularly incendiary and prompted swift backlash.

"So some day, if a Democrat becomes President and the Republicans win the House, even by a tiny margin, they can impeach the President, without due process or fairness or any legal rights," Trump tweeted. "All Republicans must remember what they are witnessing here - a lynching. But we will WIN!"

House Majority Whip James Clyburn (D-S.C.) appeared on CNN shortly after the tweet was posted and appeared visibly agitated by Trump’s use of the term.

“I really believe this man is prone to inflammatory statements, and that is one word no president ought to apply to himself,” Clyburn said.

“I’ve studied presidential history quite a bit, and I don’t know if we’ve ever seen anything quite like this,” he continued. “Andrew Johnson never would have described what was happening to him this way, and certainly Bill Clinton didn’t, nor did Nixon.”

Rep. Bobby Rush (D-Ill.), a civil rights activist who founded a chapter of the Black Panthers in the 1960s, said Trump should delete the tweet.

Rep. Karen Bass (D-Calif.), the chairwoman of the Congressional Black Caucus, blasted Trump for “comparing a constitutional process to the PREVALENT and SYSTEMATIC brutal torture of people in THIS COUNTRY that looked like me?"

Among Republicans, Rep. Adam Kinzinger (R-Ill.), who has been vocally critical of Trump’s moves in Syria, rebuked Trump for using the term and called on him to immediately retract it.

“We can all disagree on the process, and argue merits.  But never should we use terms like ‘lynching’ here. The painful scourge in our history has no comparison to politics, and @realDonaldTrump should retract this immediately.  May God help us to return to a better way,” Kinzinger tweeted.

Trump’s tweet likening impeachment to “lynching” comes one day after he called on Republicans to more vociferously defend him against the impeachment investigation.

"The two things they have: They’re vicious and they stick together," Trump said of Democrats during a Cabinet meeting on Monday. "They don’t have Mitt Romney in their midst. They don’t have people like that."

But Trump’s latest remark is likely to make that difficult. While Republicans are largely against impeaching Trump and have presented a unified front on that issue, they have struggled to deal with a wave of self-inflicted controversies caused by the White House in recent weeks.

Many are displeased with Trump’s decision to pull U.S. troops from northern Syria – a decision that effectively paved the way for a Turkish military operation against U.S.-allied Kurds – and pushed back last week on his since-reversed decision to host the Group of Seven (G-7) summit at his Doral resort.

Sen. Lindsey Graham (R-S.C.), a staunch Trump ally who has also been critical of the Syria decision, backed Trump for calling impeachment a "lynching," telling reporters Tuesday: "This is a lynching in every sense.”

“You can understand why the president’s frustrated,” Rep. Jim Jordan (R-Ohio) said when asked if the “lynching” tweet was appropriate, calling the impeachment inquiry a "ridiculous charade."

Trump also drew criticism from some Democratic presidential candidates on Monday, including former secretary of Housing and Urban Development Julian Castro, who tweeted that it is “beyond shameful to use the word ‘lynching’ to describe being held accountable for your actions.”

“Lynching is a reprehensible stain on this nation's history, as is this President. We'll never erase the pain and trauma of lynching, and to invoke that torture to whitewash your own corruption is disgraceful,” Harris tweeted.

The president’s comments will be particularly difficult for his allies to defend given his history of racially offensive rhetoric.

Trump has criticized black athletes who have protested police brutality and social injustice during the national anthem, suggesting they don’t belong in the country.

He reportedly described Haiti and African nations as “shithole countries” and questioned why the U.S. could not take more immigrants from European nations.

Trump caused a firestorm over the summer when he tweeted that four minority congresswomen should “go back” to their countries, despite all four being U.S. citizens and three of them being born here.

Trump’s attacks on Democrats have increased in fervency in the four weeks since House Speaker Nancy Pelosi (D-Calif.) announced the lower chamber would move forward with an impeachment inquiry focused on his effort to have Ukraine investigate 2020 Democratic contender and former Vice President Joe  Biden.

Trump has lashed out at Pelosi and other Democrats on Twitter and at his campaign rallies, accusing them of trying to bruise him ahead of the 2020 election.