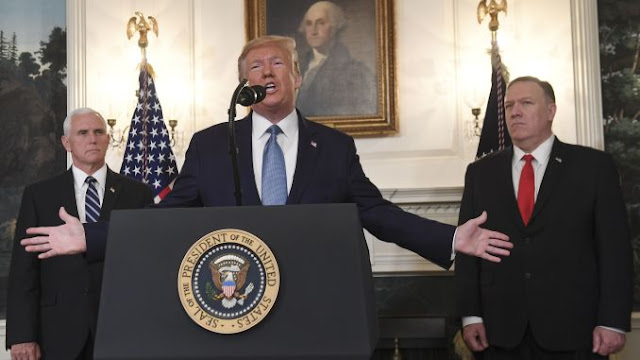 President Trump announced Wednesday that his administration would lift sanctions on Turkey after Ankara agreed to stop an offensive in northern Syria and agreed to a permanent ceasefire.

“Earlier this morning, the government of Turkey informed my administration that they would be stopping combat and their offensive in Syria and making the ceasefire permanent,” President Trump said in remarks from the Diplomatic Reception Room Wednesday morning.

Trump acknowledged the tenuous situation, adding: “You would also define the word permanent in that part of the world as somewhat questionable. We all understand that. But I do believe it will be permanent.”

“So the sanctions will be lifted unless something happens that we’re not happy with,” he said.

Trump said that his administration would “reserve the right” to reimpose sanctions on Turkey, including increased steel tariffs, if Ankara falls short of its obligations, including protecting religious and ethnic minorities.

Trump said he has instructed Treasury Secretary Steven Mnuchin to lift sanctions on Turkey announced on Oct. 14, which targeted top officials and agencies in Ankara, as well as increasing tariffs.

The speech had the tone of a victory lap for Trump. He insisted he had kept his promises, arguing the U.S. had saved “tens of thousands of Kurds” in the short-term alone.

Trump chided the Obama administration for failing to adequately address the situation in Syria, and he boasted that his overall strategy paid off even as he has come under intense bipartisan scrutiny for his policies on Turkey and Syria.

The president is unlikely to be able to fend off continued criticism that the U.S. is ceding ground to enemies and abandoning allies. Russia has already begun to fill the void of U.S. troops in Syria as they exit, reaching an agreement with Turkey a day prior to push Kurdish forces out of territory they once controlled in northern Syria .

During his remarks, Trump harkened back to the themes of his original campaign for president, during which he promised to bring home U.S. troops from conflicts abroad.

“The job of our military is not to police the world,” he said.

Trump weeks ago abruptly announced the removal of U.S. troops from northern Syria, a decision that precipitated a Turkish military incursion against Kurdish forces in the region who had been U.S. allies in the fight against ISIS.

The decision was heavily criticized by both Republican and Democratic lawmakers and led to a House resolution passed with bipartisan support that rebuked Trump.

Lawmakers argued Trump was abandoning the Kurdish fighters and had given the green light for Turkey to launch an offensive into northern Syria that led to bloodshed and uncertainty.

Lawmakers have also called for sanctions on Turkey for its offensive against the Kurds.

But Trump on Wednesday dismissed the idea that the U.S. bears blame for any negative consequences, instead declaring that the newfound ceasefire was a product of his administration.

“This was an outcome created by us, the United States, and nobody else. No other nation. Very simple,” Trump said, flanked by Vice President Mike Pence, Secretary of State Mike Pompeo and national security adviser Robert O’Brien.
“We’re willing to take blame and we’re also willing to take credit,” he added. “This is something they’ve been trying to do for many, many decades.”

Trump vociferously defended his decision to pull U.S. troops from northern Syria and again asserted that the violent skirmishes between Turkish and Kurdish forces were necessary to get a ceasefire.

“Halting the incursion by military force would have required deploying tens of thousands of military troops against Turkey, a NATO ally,” Trump said, cheering his “good” relationship with Turkish President Recep Tayyip Erdoğan.

Trump's announcement came hours after the Turkish Army had halted its incursion into northern Syria and one day after Turkey and Russia struck a deal that gives Moscow additional influence in the region and forces Kurdish forces to retreat from the area.

The Turkish Defense Ministry said in a statement that it would not advance further into Syria in its offensive targeting Kurdish forces.

The deal between Ankara and Moscow redraws the power structure in the region given the absence of the U.S. The agreement allows the Russia-backed Syrian government of President Bashar Assad to retake parts of the country the Kurds had previously controlled.

Trump also confirmed he would leave a “small number” of U.S. troops in Syria near oil fields. He said the U.S. troops would be “protecting” the oil and “deciding what we’re going to do with it in the future.”

Lawmakers have expressed concern that the chaos caused by Turkey’s invasion would lead to an ISIS resurgence, including allowing ISIS prisoners to escape while their Kurdish guards focused on fighting Turkey.

But that, too, Trump dismissed Wednesday. He said just a “small number” have escaped, adding, without evidence, that they have been “largely recaptured.” He also said Kurdish Gen. Mazloum Kobani has assured him that prisoners remain under “very, very strict lock and key.”

Defense Secretary Mark Esper said Tuesday in an interview with CNN that "a little bit more than 100" ISIS fighters have escaped.

Questions remain about how the United States will continue its anti-ISIS campaign in Syria with most U.S. troops leaving.

U.S. officials originally said the troops would move to western Iraq and conduct operations from there. But Iraqi officials, heeding the sensitivities of their constituencies at the appearance of a U.S. occupation, rejected that plan.

After meeting with Esper on Wednesday, Iraqi officials said U.S. troops would have four weeks to stay in Iraq before they have to leave.

Given all the remaining questions, Trump’s announcement is unlikely to quell the unrest that his withdrawal caused in Congress.

At the same time as Trump’s announcement, his special envoy for Syria, James Jeffrey, was testifying before the House Foreign Affairs Committee, where lawmakers told him Trump caused “a mess” in Syria.

But efforts at a congressional response to Trump’s withdrawal have hit partisan roadblocks amid debates about the best way forward.

A House-passed resolution opposing the withdrawal has been blocked twice in the Senate. And Senate Majority Leader Mitch McConnell (R-Ky.) has introduced his own resolution, saying the House one was “badly insufficient.”

McConnell on Tuesday also threw cold water on the idea of quickly moving on sanctions against Turkey.

“I am aware there is some appetite on both sides of the aisle to quickly reach for the toolbox of sanctions,” he said. “But I caution us against developing a reflex to use sanctions as our tool of first, last and only resort in implementing our foreign policy.”