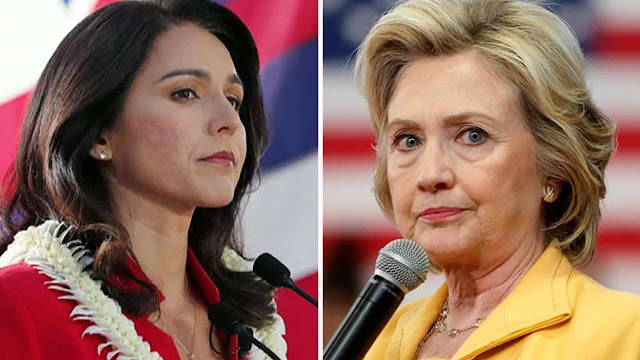 “Hillary Clinton, I don’t know if you’ve heard of her, she’s the one accusing everybody of being a Russian agent. Anybody that is opposed to her is a Russian agent,” Trump told reporters during a Cabinet meeting. “That’s a scam that was pretty much put down."

“These people are sick. There’s something wrong with them,” Trump, who has repeatedly cast doubt on the intelligence community’s conclusion that Russia interfered in 2016 to help him defeat Clinton, said.

Trump also claimed that Gabbard, whose presidential campaign has struggled in the polls, would be helped by Clinton’s comments.

“I think that Tulsi Gabbard probably got helped quite a bit by this there.”

“I think we were helped,” Trump said, accusing Clinton of perpetrating a “scam.”

The two Democrats traded barbs last week, after Clinton suggested during a podcast interview that the Russians were “grooming” Gabbard to run as a third-party candidate in 2020.

"I'm not making any predictions, but I think they've got their eye on somebody who is currently in the Democratic primary and are grooming her to be the third-party candidate," Clinton said, without naming Gabbard specifically. "She's the favorite of the Russians."

Clinton went on to mention former Green Party candidate Jill Stein, describing her as a “Russian asset.” She did not provide proof for her assertions.

Gabbard hit back on Twitter, going after Clinton directly by labeling her the “queen of warmongers” and accused the former Democratic nominee of participating in a “concerted campaign” to damage her reputation. Gabbard has also sought to fundraise off of Clinton’s remarks.

“You, the queen of warmongers, embodiment of corruption, and personification of the rot that has sickened the Democratic Party for so long, have finally come out from behind the curtain,” Gabbard tweeted Friday.

Gabbard’s name has been cited in Russian state media outlets and reports have suggested that Russian bot activity appearing to boost her name, though there is no definitive proof that the Russian propaganda machine is looking to promote her ahead of 2020.

Gabbard, who has put forth unconventional policy positions, has struggled to break through during the Democratic presidential primary.

During last week’s Democratic debate, Gabbard, who has been critical of U.S. presence in Syria, accused politicians from both parties of supporting a “regime change war” in Syria.