Trump confirms Rick Perry to step down as Energy secretary 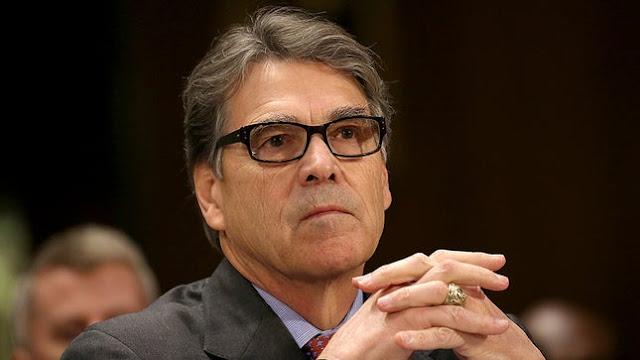 Energy Secretary Rick Perry, whose dealings with Ukraine have become a focus of the House impeachment inquiry into President Trump, will step down from his Cabinet post at the end of the year, Trump said Thursday.

The president told reporters at the start of a ribbon-cutting event at a Louis Vuitton factory in Alvorado, Texas, that he already has a replacement for Perry, but he did not say who it would be. Trump said he would make the announcement shortly.

“Rick and I have been talking for six months. In fact, I thought he might go a bit sooner. But he’s got some very big plans. He’s going to be very successful. We have his successor, we’ll announce it pretty soon," Trump said.

Trump spoke fondly of Perry during the event, introducing the former Texas governor as a "very good friend of mine," adding "I'm going to miss you so much."

“We’ll be announcing the replacement, and he — I think it’s a he in this particular case —  I think he’ll do a fantastic job," Trump added. "We worked on that together. Right, Rick?"

Perry's resignation had been expected for weeks, particularly after news of his involvement in Trump's efforts to encourage Ukraine to investigate former Vice President Joe Biden's son Hunter, who once sat on the board of a Ukrainian energy company.

Perry was one of the “three amigos” dealing with Ukraine, alongside former special envoy Kurt Volker and Gordon Sondland, the U.S. ambassador to the European Union, according to Rep. Gerry Connolly (D-Va.), who cited the recent testimony of a top State Department official. Trump is said to have named Perry as the impetus for the July 25 call with Ukrainian President Volodymyr Zelensky that is at the center of the impeachment probe.

"Not a lot of people know this but, I didn't even want to make the call. The only reason I made the call was because Rick asked me to,” Trump said earlier this month, according to Axios.

The timing of Perry’s departure is sure to raise eyebrows, particularly as it comes amid growing scrutiny of Trump officials who were involved with Ukraine.

Democrats are pressing forward with witness testimonies as part of their impeachment probe. Multiple witnesses, including top State Department officials who ignored White House directives not to testify, have raised concerns about what they described as a shadow foreign policy conducted outside the normal diplomatic channels.

Perry recently told Fox News he was not sure if he would comply with a congressional subpoena for records related to the Ukraine controversy. The deadline for submitting those documents is Friday.

"The House has sent a subpoena over for the records that we have, and our general counsel and the White House counsel are going through the process right now," Perry said earlier this month. "I’m going to follow the lead of my counsel on that.”

Those remarks came after the White House wrote a letter to House leaders saying the executive branch would refuse to comply with the inquiry, but Perry’s resignation could open the door to his eventual participation in the probe.

Reports that Perry would soon be departing the administration have persisted throughout his tenure.

“No. I’m here, I’m serving," Perry said earlier this month at a news conference. “They’ve been writing the story for at least nine months now. One of these days they will probably get it right, but it’s not today, it’s not tomorrow, it’s not next month."

Perry said it was energy issues that pushed him to broker a call between Trump and the Ukrainian president. In his role as Energy secretary, Perry has engaged in conversations with Naftogaz, Ukraine's state-owned oil and gas company.

Perry, who ran for president in 2012 and 2016, is one of Trump’s longest-serving Cabinet secretaries, having served 31 months in the administration.

The former Texas governor has kept a relatively low profile throughout his time in the administration, in contrast to the actions of his fellow energy and environment agency heads, two of whom resigned amid ethics concerns.

Perry took heat early on in his post when in September 2017 he submitted an unprecedented proposal to prop up the struggling coal and nuclear industry. Federal regulators later killed the plan.

He was also criticized for a rule that rolled back Obama-era standards for lightbulbs, eliminating energy efficiency standards for nearly half the bulbs on the market.

Perry was considered for other administration posts during Trump’s presidency. He was among the potential nominees to replace Kirstjen Nielsen as the head of the Department of Homeland Security in early April. He denied interest in taking the position.

Some lawmakers stressed that Perry's resignation should clear the way for his participation in the House impeachment inquiry.

“I once believed Secretary Perry was one of the more upstanding members of the cabinet. Now we are learning that he was directly involved in the criminal wrongdoing of this Administration with respect to Ukraine," said Rep. Paul Tonko (D-N.Y.), a member of the House Energy and Commerce Committee, where Perry testified several times.

"If he has knowledge or evidence of criminal actions he needs to disclose it, and if he broke the law he needs to come forward and accept the consequences.”

"Rick is a good man and a good friend who has devoted his life to serving his country, especially the great state of Texas. He went from being Texas' longest-serving governor to heading the Department of Energy, where he was a leading advocate for U.S. energy," Sen. Ted Cruz (R-Texas) said in a statement. "I wish him the best as he returns to private life after a long, successful, and productive career."