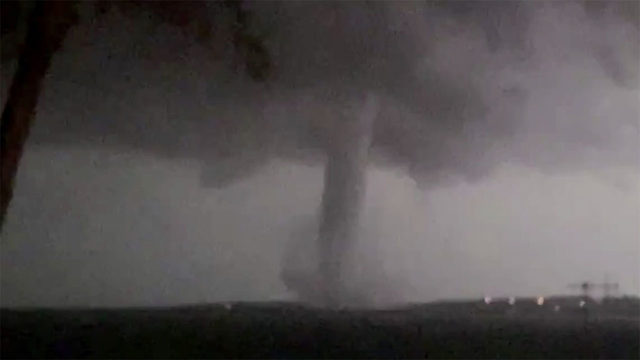 At least one tornado touched down in the Dallas area amid stormy weather on Sunday night, tearing through structures, overturning cars and knocking out electricity for thousands.

The Dallas Independent School District canceled Monday classes at six schools, citing "extensive damage" to a number of campuses due to the severe weather.

There were also reports of gas leaks north of Dallas' Walnut Hill neighborhood, according to a press release from the city of Dallas.

Rocky Vaz, the director of the City of Dallas Office of Emergency Management, said six people were transported to local hospitals but were not seriously injured. However, there were no reports of deaths or serious injuries as of early Monday morning, according to the city.

More than 167,000 electric customers were without power across Texas as of 6:30 a.m. local time. About 65,000 of those customers were within Dallas, according to the city, which opened the Bachman Recreation Center early Monday morning for people seeking shelter.

The Dallas Police Department and Dallas Fire-Rescue are assessing the damage.

In the city of Sachse, a northeast suburb of Dallas, six houses sustained "significant high-wind damage after severe weather moved through the area Sunday night," and four of those homes were left "uninhabitable," though no injuries had been reported, according to a press release from the city.

Meanwhile, two tornadoes were reported near the city of Tyler, about 100 miles southeast of Dallas.

A tornado watch remains in effect for eastern Texas as residents brace for another storm Monday morning.