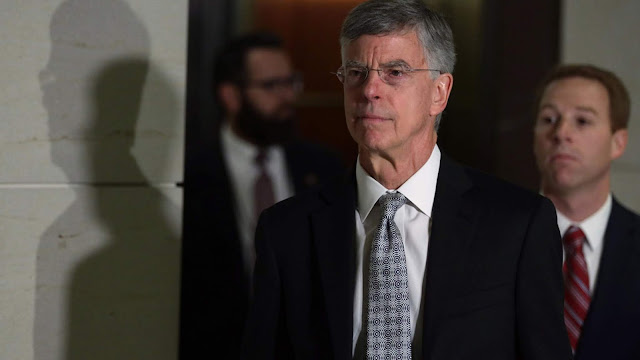 A top diplomat to Ukraine told House investigators Tuesday that he believed the Trump administration withheld aid to Ukraine in an effort to get Ukrainian President Volodymyr Zelensky to launch politically motivated investigations, according to his opening statement and multiple sources familiar with his testimony.

William Taylor, who serves as the chargé d’affaires for Ukraine, in meticulous detail laid out in his lengthy 15-page opening statement what he viewed as President Trump withholding roughly $400 million in financial aid until he secured commitment from Ukraine that they were investigating one of his top political rivals, former Vice President Joe Biden.

The top diplomat, who spent nearly 10 hours behind closed doors, tied Trump officials like personal attorney Rudy Giuliani; U.S. Ambassador to the E.U. Gordon Sondland; then-special envoy to Ukraine Kurt Volker; and Energy Secretary Rick Perry to a secretive shadow foreign policy campaign that sought to obtain a public statement about investigations into the 2016 presidential election and Burisma, a Ukrainian energy company that employed former Biden’s son, Hunter. His statements counter the claims made by the president and his defenders arguing the aid was not used as leverage.

“[T]he push to make President Zelensky publicly commit to investigations of Burisma and alleged interference in the 2016 election showed how the official foreign policy of the United States was undercut by the regular efforts led by Mr. Giuliani,” he told House investigators.

Taylor relayed that he heard from Tim Morrison, a top Ukraine expert on the National Security Council (NSC), who described a “sinking feeling” in early September that resulted from Trump telling Sondland there was no “quid pro quo,” all while continuing to insist that Zelensky should publicly announce that he is “opening investigations of Biden and the 2016 election interference, and that President Zelensky should want to do this himself.”

Sondland, who continued to insist there was no quid pro quo, said later that the U.S. and Ukraine would be in a “stalemate” if Zelensky did not follow through with the public statement, according to Taylor’s statement.

“During our call on September 8, Ambassador Sondland tried to explain to me that President Trump is a businessman. When a businessman is about to sign a check to someone who owes him something, he said, the businessman asks that person to pay up before singing the check,” Taylor told investigators.

Taylor said that he pressed Sondland to push back on Trump’s demands for investigations, worrying it would hurt the U.S. relationship with the country. Sondland, Taylor recalled, later admitted he had made a mistake by insisting Zelensky make a public announcement about the probes.

“Ambassador Sondland also told me that he now recognized that he had made a mistake by earlier telling the Ukrainian officials to whom he spoke that a White House meeting with President Zelensky was dependent on a public announcement of investigations — in fact, Ambassador Sondland said ‘everything’ was dependent on such an announcement, including security assistance,” the opening statement continues.

Taylor also said he learned from two other officials that the order to hold security assistance for Ukraine came from White House chief of staff Mick Mulvaney, who they said still had “maintained a skeptical view of Ukraine.”

In his testimony, Taylor described two channels “of U.S. policy-making and implementation — one regular and one highly irregular, and that he realized the two channels diverged in terms of their mission in August.

Multiple sources familiar with Taylor’s testimony said it was clear he was considered there was a quid pro quo with the aid, something the White House strongly pushed back on later Tuesday.

“President Trump has done nothing wrong — this is a coordinated smear campaign from far-left lawmakers and radical unelected bureaucrats waging war on the Constitution.  There was no quid pro quo,” White House press secretary Stephanie Grisham said in a statement Tuesday. “ Today was just more triple hearsay and selective leaks from the Democrats’ politically-motivated, closed door, secretive hearings.”

Most Democrats emerging Tuesday from Taylor’s closed-door testimony in the Capitol basement were tight-lipped on details but effusive on a central point: the ambassador, they said, was delivering the most damning testimony yet in the Democrats' impeachment investigation into President Trump.

"Without question the most powerful testimony we've heard," said Rep. Stephen Lynch (D-Mass.), who sits on the Oversight Committee.

"This testimony is a sea change. I think it could accelerate matters," Lynch continued. "This will, I think, answer more questions than it raises."

Some Republicans, however, described Taylor's testimony as an official putting his "interpretation" on the Ukraine contacts. While others highlighted that Taylor heard many of these matters from other officials, making his knowledge of events second hand.

"If they think this is anything dramatic, it is just nonsense," said Rep. Chris Stewart (R-Utah), a senior Republican on the House Intelligence Committee. "There was nothing in this, nothing at all. It was his interpretation of what we already know."

Taylor was among the State Department veterans who had raised red flags about the White House campaign, led by Trump’s personal lawyer, Giuliani, to pressure Zelensky for political favors. The Democrats’ impeachment inquiry is now focused squarely on that episode.

In text message conversations with several other diplomats, including Sondland, Taylor last month had warned against the “crazy” strategy of withholding U.S. aid “for help with a political campaign." Taylor confirmed in his opening remarks that he seriously considered quitting in protest of the Trump administration’s policy towards Ukraine, a threat he made in the text message thread with Sondland and Volker.

Sondland, a wealthy hotel magnate and Trump donor with no previous diplomatic experience, pushed back, saying Taylor was "incorrect" in surmising Trump's intentions.

"The president has been crystal clear no quid pro quos of any kind," Sondland wrote.

Sondland had testified last week before the three House committees leading the Democrats’ impeachment inquiry: Intelligence, Oversight and Foreign Affairs. But based on Taylor’s testimony Tuesday, some Democrats are already suggesting Sondland will be called back to explain apparent discrepancies.

“I walk away with the impression Mr. Sondland will have some explaining to do,” said Rep. Raja Krishnamoorthi (D-Ill.), a member of the Intelligence Committee.

Lynch described Taylor as a "meticulous" note-taker who had kept detailed records of his involvement in the months-long effort by Trump and some of his closest allies to pressure Ukrainian leaders to find dirt on Trump's political rivals.

"He indicated that he kept extensive notes on all of this," Lynch said.

Rep. Tom Malinowski (D.N.J.), a member of the Foreign Affairs Committee, also suggested Taylor's testimony was supportive of the central allegations facing Trump on his dealings with Ukraine.

"I would say it certainly filled in many of the remaining gaps in the narrative," Malinowski said. "I would say he remembered some things that previous witnesses have not been able to remember."

Democrats participating in the deposition said Taylor has also stood by his earlier statement that it would be “crazy” to leverage the U.S. financial assistance — which aimed to combat Russian aggression in Ukraine — to win a commitment from Zelensky to open such investigations.

“His testimony was withering with respect to some earlier testimony,” said Lynch.