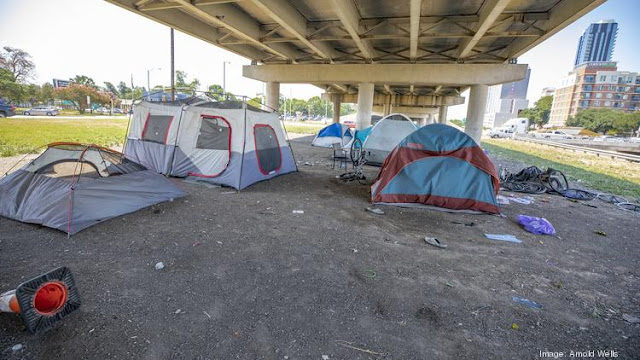 Texas Gov. Greg Abbott (R) moved Tuesday to clear homeless camps in Austin after warning he would step in if city officials were not able to address the issue.

A notice sent out Tuesday by Abbott's office informs residents that camps under city overpasses and bridges will be cleared out by the state Department of Transportation (DOT) and police next week, local NBC affiliate KXAN reported.

The notices go on to say that the thousands of homeless in the city are welcome at the Salvation Army or other homeless shelters in the city.

“Governor Abbott has been clear that unless the City of Austin demonstrated improvements to protect public health and safety, the state of Texas would step in to address this crisis,” said a spokesman for the governor, according to KXAN. “With today’s notice from TxDOT, the Governor is following through on his promise.”

“The Office of the Governor is working with a coalition consisting of private sector and faith-based organizations on longer-term solutions," added the spokesman.

On Monday, a city ordinance in Austin took effect banning camping, sitting or lying in front of business entrances. Police officers and city officials reportedly spent the day handing out flyers to homeless residents informing them of the new ordinance.

Mayor Steve Adler (D) has criticized efforts he said would criminalize the city's homeless population and last month said that the city was working to address the homeless crisis.

“Our goal is to not have anybody camping anywhere in our city, and that is our goal — to find housing for people,” Adler said, according to KXAN. “We didn’t change any of our ordinances that dealt with public safety issues or public health issues. We expect our law enforcement to continue to enforce the laws we have in this state, but if someone’s not creating a public safety risk or a public health hazard, we shouldn’t be trying to put them in jail. What we should be doing is trying to put them in a home. That’s how we solve this challenge. That’s how we end homelessness.”