Shooting in Greenville, Texas leaves 2 dead and 12 others wounded 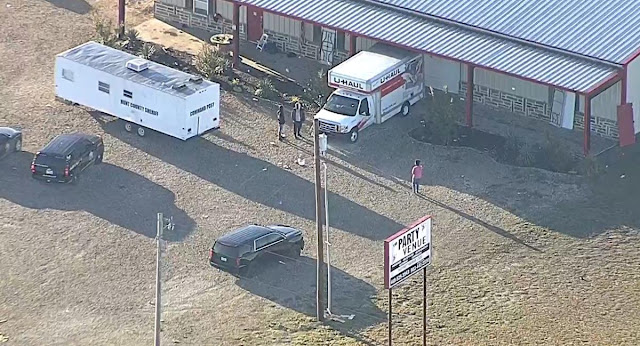 At least two people were killed and sixteen more injured after a shooting at a homecoming party in Greenville, Texas, police said early Sunday. The identity of the shooter remains unknown.

The Hunt County Sheriff's Office received a call at approximately 11:30 p.m. on Saturday night with a complaint of vehicles illegally parked along the shoulder of Highway 380, Hunt County Sheriff Randy Meeks said in a press conference Sunday.

Police arrived to investigate the parking complaint, and gunshots broke out at approximately 11:45 p.m. at The Party Venue in Greenville. The party was about 18 miles from the Texas A&M-Commerce University campus and wasn’t a university-sanctioned event.

Greenville is about 50 miles northeast of Dallas.

"When shots were fired it was complete chaos as people fled for safety and deputies attempted to locate the shooter," Meeks said.

Police believe the suspect, who remains at large, is one male shooter and the weapon is a handgun.

Police estimated that over 750 people were in attendance at the event. Although the party was not sanctioned by Texas A&M University-Commerce, Meeks said it was organized by a group called Good Fellows, of which some members were university students.

Meeks said the shooter may have targeted the first victim deliberately and then fired at random at the rest of the crowd.

One off-duty officer had been at the venue for security.

Those injured in the shooting were from Dallas, Fort Worth, Arlington, Cedar Hill, Commerce and Greenville, Hunt County Chief Deputy Buddy Oxford told reporters on Sunday.

The college said in a statement that "Our thoughts and prayers are with the victims, families, and friends of those affected by this morning’s shooting."