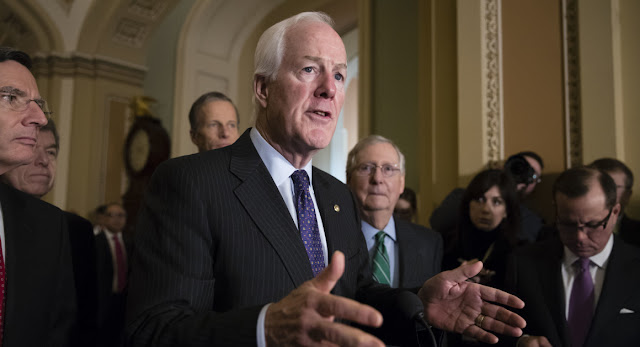 Sen. John Cornyn (Texas), the No. 2 Republican in the upper chamber, announced he will introduce legislation on Wednesday to reduce mass violence in the U.S.

He said his bill, entitled the RESPONSE Act, or Restoring, Enhancing, Strengthening and Promoting Our Nation’s Safety Efforts, is a direct response to the August shootings in Texas.
“No person, family, or community should endure the heartbreak caused by the recent mass shootings in Texas,” he wrote. “It’s time to answer their call for action, and pass the RESPONSE Act to keep our communities safe from mass violence.”

Shootings in the Texas cities of El Paso and Midland-Odessa killed 22 and seven people, respectively.

Cornyn said his bill would aim to prevent shooters like the Midland-Odessa shooter from illegally getting access to a firearm after failing a background check. The bill would initiate a national task force to track those illegally selling firearms and those attempting to purchase firearms with false statements in their background checks.

House Democrats pushed gun legislation to the Senate after these shootings, but gun reform has taken a back seat as the impeachment inquiry and foreign policy in Syria has been at the forefront on Capitol Hill.