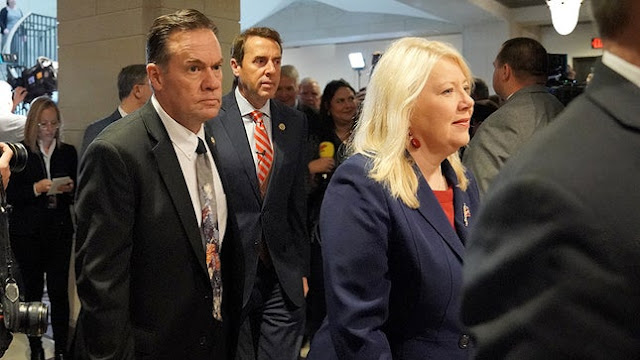 House Republicans stormed a closed-door hearing Wednesday morning to protest Democrats' impeachment inquiry process, breaking up the deposition of a top Defense Department who was testifying about President Trump's dealings with Ukraine.

"They crashed the party," said Rep. Harley Rouda (D-Calif.), a member of the Oversight Committee, one of three House panels leading the impeachment probe.

Dozens of Republicans, including some members of leadership, barged into the secure hearing room in the Capitol basement where Laura Cooper, the deputy assistant secretary of defense for Russia, Ukraine and Eurasia, was set to provide private testimony. GOP lawmakers have argued that other lawmakers, not just members of the three committees leading the probe, should be able to attend the closed-door hearings with witnesses.

Rep. Roger Marshall (R-Kan.) said Schiff said “nothing” when the members sat down before he left with Cooper.

Rep. Michael Waltz (R-Fla.) said Schiff left the room and said the hearing has been postponed. He added that Schiff is “threatening” GOP members with ethics violations.

Roughly 25 Republican lawmakers remained in the room, according to Rep. Debbie Wasserman Schultz (D-Fla.). She said the Democrats' impeachment probe has "far too much fact for their comfort level, so they have to try to stop it from moving forward."

The move by House Republicans comes a day after another witness, top diplomat William Taylor, testified that Trump withheld military aid to Ukraine to pressure the country to conduct a pair of investigations — one into the 2016 election hacking, the other into the family of former Vice President Joe Biden — that might have helped Trump's reelection campaign next year.

Some of Republicans who barged into the hearing room were in possession of cellphones, a violation of the rules governing the so-called sensitive compartmented information facility, known as the SCIF, where the depositions have been taking place.

Wassermann Schultz said Cooper was not in the room at the time the Republicans entered. It's unclear, she added, what will happen next in terms of Cooper's testimony.

"It appears that they're refusing to leave," she said, referring to GOP lawmakers.

Rep. Chris Stewart (R-Utah), a member of the Intelligence Committee who is allowed in the closed-door hearings, said leadership is trying to “resolve this amicably.”

“We want this to continue,” Stewart said, adding that Republicans are not trying to stop the hearing.

“We want to hear from this witness but so do the other members of Congress,” he said. “This may be within House rules, that’s not the question. The question is, is it a good idea to try and impeach the president in secret hearings.”