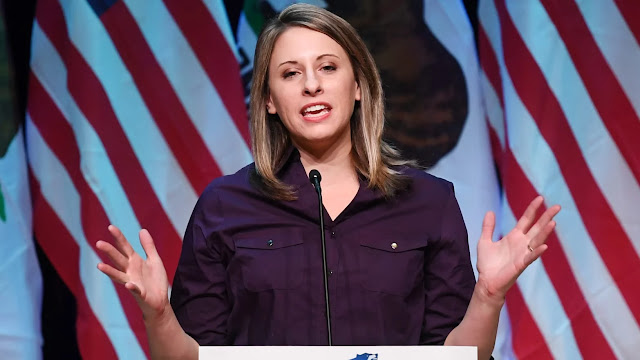 Freshman Rep. Katie Hill (D-Calif.), a rising star in the Democratic Party and a member of Speaker Nancy Pelosi's (D-Calif.) leadership team, said Sunday she is resigning from office amid allegations she had inappropriate sexual relationships with congressional and campaign staffers.

"It is with a broken heart that today I announce my resignation from Congress," Hill said in a statement. "This is the hardest thing I have ever had to do, but I believe it is the best thing for my constituents, my community, and our country."

The stunning development comes just four days after the House Ethics Committee launched an investigation into allegations that Hill, 32, had violated House rules by engaging in a sexual relationship with a staffer in her office.

Hill, who identifies as bisexual, had forcefully denied that allegation, though she admitted she had engaged in a relationship with a campaign staffer before she was elected to Congress. Hill last week apologized to her constituents for that dalliance, calling it “inappropriate.”

House rules bar sexual relationships with office staff, but the prohibition does not extend to campaign aides.

Over the weekend, new reports emerged that Hill had paid a campaign aide she had been romantically involved with a $5,100 bonus.

In her lengthy statement, Hill suggested she was resigning to stop some of her supporters from being dragged through the mud.

“This is what needs to happen so that the good people who supported me will no longer be subjected to the pain inflicted by my abusive husband, and the brutality of hateful political operatives who seem to happily provide a platform to a monster who is driving a smear campaign built around cyber exploitation,” Hill said.

“Having private photos of personal moments weaponized against me has been an appalling invasion of my privacy. It's also illegal. And we are currently pursuing all of our available legal options,” she added.

The news, which shocked Washington, brings an abrupt end to the congressional career of a young Democrat who was already on a leadership trajectory and making a name for herself in the diverse caucus.

Hill flipped a Republican seat in last year’s midterms, defeating then-Rep. Steve Knight (R-Calif.), and was elected to represent the large class of Democratic freshmen at Pelosi’s leadership table along with Rep. Joseph Neguse (D-Colo.) She was also tapped as the vice chairwoman of the powerful House Oversight and Reform Committee, one of the three panels leading the Democrats’ impeachment inquiry into President Trump.

Republicans already had been targeting Hill’s seat this cycle, and her resignation will bolster their efforts. But California’s 25th District — which includes parts of northern Los Angeles County and eastern Ventura County — has been trending bluer in recent cycles.

“Congresswoman Katie Hill came to Congress with a powerful commitment to her community and a bright vision for the future, and has made a great contribution as a leader of the Freshman Class," Pelosi said in a statement Sunday night. "She has acknowledged errors in judgment that made her continued service as a Member untenable. We must ensure a climate of integrity and dignity in the Congress, and in all workplaces.”

“California voters are completely disgusted at what they’ve seen from the socialist Democrats these past ten months," NRCC Chairman Tom Emmer said.

“Democrats’ efforts to abolish private health insurance and their endless obsession with removing President Trump from office make it clear they aren’t serious about delivering for the hardworking men and women of this country.

“We look forward to winning back this seat and giving voters in CA-25 someone they can be proud to support.”