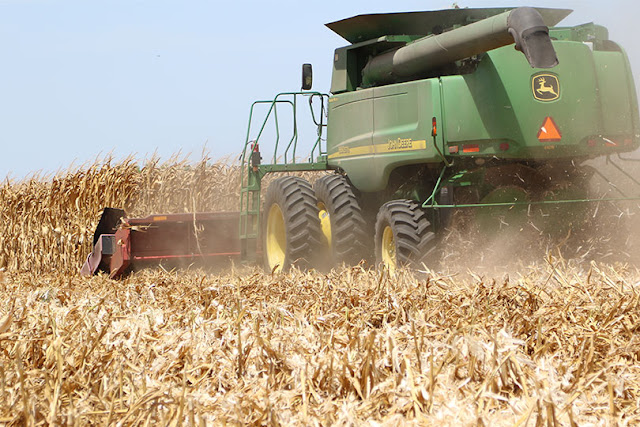 Wet weather, high winds, hail and other factors have delayed cotton and corn harvest in parts of the Texas Panhandle.

As of Oct. 11, cotton harvest was about a month behind, according to Nick Simpson, Texas A&M AgriLife Extension Service agent for Gray County, which includes Pampa and Lefors.

“Starting off this year, we had heavy amounts of rainfall, so the fields were too wet to get into the field to plant,” Simpson said. “Then the stuff that did get planted had a lot of disease pressure (and) a lot of chilling injury, which resulted in quite a bit of replant acres.”

After all that, the cotton that was established was damaged by high winds and hail.

“It seems like, for the Panhandle, there’s a little pocket here around this Gray and Carson County area that actually had some cotton that made it, but where we’re at now, we had a pretty good growing season,” Simpson said. “Things were just late.”

“We’ve got cotton that’s not fully opened yet. The primary bolls are open, but it looks like most of the growers from what I can tell, everybody’s got their prep and death on. The plants were starting to turn color and getting ready to defoliate,” Simpson said. “We just didn’t need this freeze.”

Growers in Gray County grow both dryland and irrigated cotton.

Simpson is new to the area, but estimates the cotton yields in the area are below-average.

This year, some farmers opted to plant corn or grain sorghum after cotton failed.

“Corn right now looks good,” Simpson said. “This first stuff we’re getting out is probably about average. I’ve heard of some above-average, and then I’ve also heard of some, not train wrecks, but yields that are 15-20 bushels off.”

Corn harvest is a bit behind schedule due to the wet weather and because some farmers planted late after their cotton crops failed.

“We’ve got a lot of corn out there that is just now at black layer. It’s mature, but there’s still a lot of green leaf out there,” Simpson said. “That’s probably going to hurt our test weights quite a bit and probably knock the yields back some.”

Recent cold fronts may take a toll on the corn that has not yet been harvested, but the extent of damage depends on plant variety.

“I have seen it before where we’ll get a freeze like this, and it just shuts the plant down, and then the plant dries up and is ready to harvest in three or four days,” Simpson said.

More commonly, a freeze will stop a plant from photosynthesizing.

“It just kind of sits there and that moisture stays too high to even harvest,” Simpson said. “It just takes it a while to dry out.”

A farmer who planted a short-season corn after the Fourth of July and did not irrigate until after pollination saw 180 bushel corn.

Corn growers in the area saw spider mites this year, which is normal for the area.

Earworms were an issue for farmers who planted non-Viptera corn.

“We had a lot of growth,” Simpson said. “What we’re concerned about is with this rain, we’re going to be doing a lot of programs talking about wildfire. This part of the Panhandle, kind-of north and east of here, that’s a lot of pasture and some taller grass areas.”

More grass and other vegetation can help fuel wildfires.

“If we have a dry winter, we could be looking at that,” Simpson said.