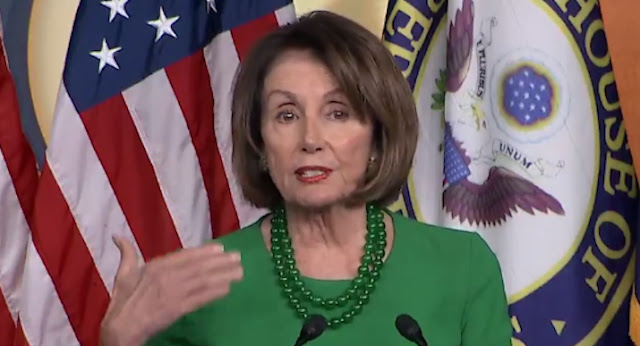 Speaker Nancy Pelosi (D-Calif.) said Tuesday she will not stage a vote on the House floor to officially launch an impeachment inquiry into President Trump.

The decision came after Democratic leaders, returning to Washington following a two-week recess, had reached out to members of their diverse caucus to gauge the party's support for such a vote.

After back-to-back meetings with party leaders and then the full caucus, Pelosi announced that no such vote would take place. Democratic aides emphasized, however, that the process remains fluid and that Pelosi may reverse course and stage such a vote at any point in the future.

"There's no requirement that we have a vote, and so at this time we will not be having a vote," Pelosi told reporters during a last-minute press briefing in the Capitol.

The decision arrives as Trump and his Republican allies are amping up the pressure on Pelosi to hold a formal vote to begin the investigation — a move they believe would grant the GOP more power and influence in the process, including the ability to call and subpoena their own witnesses.

"The minority has been shut out of the process," Rep. Michael McCaul (R-Texas), the ranking member on the Foreign Affairs Committee, told reporters Tuesday. "It is being done in a ... classified briefing room behind closed doors when it should be in front of the American people so that all can see in a very transparent way the testimony of these witnesses."

As Republicans have scrambled to defend Trump from allegations that he pressured Ukrainian President Volodymyr Zelensky to investigate former Vice President Joe Biden and his son Hunter Biden, the absence of a floor vote launching the process has emerged as a central talking point.

Last week, White House counsel Pat Cipollone delivered a letter to Pelosi warning that administration officials would not cooperate with requests for documents or witness testimony because they deem the inquiry illegitimate. He cited the Democrats' refusal to vote to launch the process on the floor — a step that preceded the impeachment investigations into former Presidents Nixon and Clinton.

Pelosi, for months, had resisted even a mention of impeachment, fearing the potential political harm the issue could do to moderate Democrats facing tough reelections next year. That changed last month after the airing of allegations from a government whistleblower that Trump had leveraged U.S. military aid to Ukraine in return for political favors from that nation's leaders.

Trump has repeatedly said he did nothing wrong in the July 25 call with Zelensky and dismissed the Democratic probe as a "witch hunt." He and Republicans have charged Democrats with seeking to topple a president through impeachment they cannot defeat at the polls.

Taking much of the pressure off of Pelosi to stage a formal vote, Democrats appeared to be nearly unanimous in thinking there's no need to do so. Many warned that it would create the impression that Republicans were dictating the terms of the process.

"I don't consider it necessary myself," said Rep. Tom Malinowski (D-N.J.), who represents a swing district. "I think all these process arguments are diversions, put out there by people who don't want to talk about the substance because the substance is so incredibly damaging."

The White House last week said it would not cooperate with the Democratic inquiry in part because of the lack of a formal vote to begin it, but that decision has not prevented Democrats from speaking to witnesses.

Pelosi's announcement came less than two hours before the Democratic 2020 primary field is set to hold its first debate since the impeachment inquiry began.