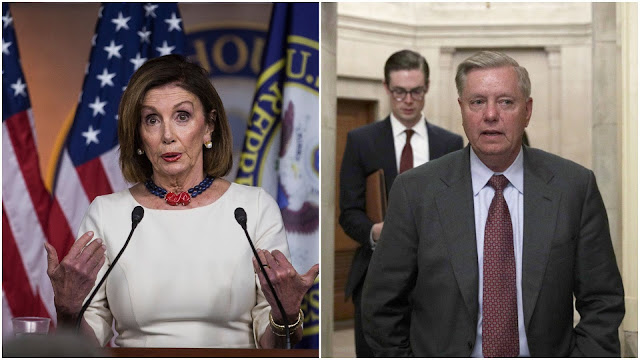 Speaker Nancy Pelosi (D-Calif.) said on Monday that she and Sen. Lindsey Graham (R-S.C.) agreed on the need for a resolution overturning President Trump's decision on Syria, as well as additional sanctions against Turkey.

"Pleased to have a conversation with Senator @LindseyGrahamSC this morning. Our first order of business was to agree that we must have a bipartisan, bicameral joint resolution to overturn the President’s dangerous decision in Syria immediately," Pelosi said in a string of tweets about the phone call.

She added that Congress also needs a bipartisan Turkey sanctions package that would go beyond potential financial penalties being considered by the administration.

"As we find ourselves in a situation where the President gave a green light to the Turks to bomb and effectively unleashed ISIS, we must have a stronger sanctions package than what the White House is suggesting," Pelosi said.

Readouts from both Pelosi and Graham did not mention a deal on specific legislation, but centered on a broader agreement that additional sanctions were needed.

Graham, in a separate tweet, said that Pelosi supports "bipartisan sanctions against Turkey’s outrages in Syria. She also believes we should show support for Kurdish allies and is concerned about the reemergence of ISIS."

"I will be working across party lines in a bicameral fashion to draft sanctions and move quickly, appreciating President Trump’s willingness to work with the Congress. The Speaker indicated to me that time was of the essence," he continued.

The call between Pelosi and Graham comes as lawmakers are trying to coalesce behind a strategy as they return to Washington from a two-week break.

Lawmakers have already introduced several pieces of legislation including sanctions against Turkey and a resolution opposing the administration's decision to pull back U.S. troops in northern Syria. Senate Minority Leader Charles Schumer (D-N.Y.) said on Sunday that Democrats would be offering a similar resolution.

Graham is expected to meet with Trump later Monday as the president weighs slapping his own financial penalties on Turkey amid widespread backlash from lawmakers about his Syria strategy.

"Dealing with @LindseyGrahamSC and many members of Congress, including Democrats, about imposing powerful Sanctions on Turkey. Treasury is ready to go, additional legislation may be sought. There is great consensus on this. Turkey has asked that it not be done. Stay tuned!" Trump tweeted over the weekend.