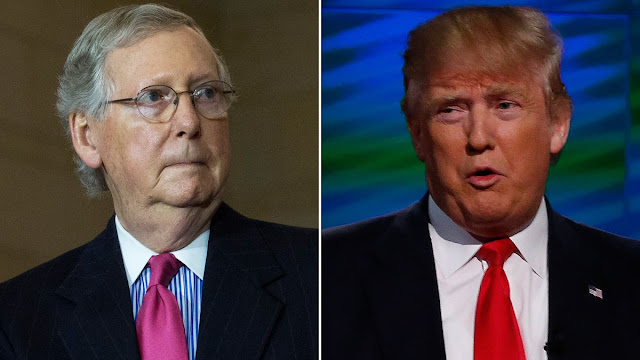 Senate Majority Leader Mitch McConnell (R-Ky.) is urging Republicans to focus on Democrats and their tactics in seeking to mount an effective defense of President Trump on impeachment.

One GOP lawmaker, summing up McConnell’s message to Republicans at a private lunch meeting Tuesday, quoted the GOP leader as saying, “This is going to be about process.”

McConnell recognizes that some members of his conference are uncomfortable defending Trump on charges his administration linked aid to Ukraine to that country’s government running politically motivated investigations meant to help the White House.

As a result, he’s telling his members they have plenty of reason to offer a vigorous defense of Trump, as the president publicly urged them to do Monday, by focusing on Democratic tactics that McConnell and Trump view as unfair.

Senate Republicans also privately make the point that it’s difficult to defend Trump on the substance of the charges against him because so much remains unknown.

GOP lawmakers don’t know the identity of the whistleblower who filed a complaint against Trump or what exactly House Democrats have discovered in their investigation, which has been conducted largely behind closed doors.

There are also outstanding questions about the nature of interactions between Trump’s personal lawyer Rudy Giuliani and Ukrainian officials over an investigation of Democratic candidate and former Vice President Joe Biden.

At the private lunch, McConnell and Senate Rules Committee Chairman Roy Blunt (R-Mo.) drew a contrast between Speaker Nancy Pelosi (D-Calif.) and past Speaker Carl Albert (D-Okla.), who served during the impeachment of President Nixon.

Albert in 1973 and 1974 gave Republicans much more of an opportunity to participate in the process, they said.

McConnell also said Democrats in the minority were treated better by former Speaker Newt Gingrich (R-Ga.) during the impeachment of President Clinton than today’s Republicans.

“What is clear and not in dispute, as Sen. Blunt has pointed out, is the process in the House to which the president is being subjected is totally unprecedented and totally unfair,” McConnell told reporters after the lunch.

“Speaker Albert laid out procedural guidelines during the Nixon episode — Speaker Gingrich during the Clinton impeachment episode — all of which included the kind of basic procedural safeguards that one associates in our country with being treated fairly,” he said.

A Republican senator who spoke on condition of anonymity said McConnell gave his colleagues leeway to express opposition to various Trump actions, such as pulling U.S. troops out of northern Syria, but urged them to stick together on process.

“He feels everybody is free to talk about issues like Ukraine or maybe the Kurds, but to try to conduct an impeachment without any process is very contrary to what happened before,” the lawmaker said. “That pretty much sums it up.”

A second Republican senator said McConnell and Blunt thought it made sense to give the Senate GOP conference a primer on past impeachment proceedings.

“It was a logical second place to go after the informational hearing on how impeachment will work in the Senate so members will know when they are talking about this process why it’s different than the way this has been done before,” the lawmaker said. “It’s one thing to say it’s unfair. It’s another thing to say here are all the boxes that were checked for Clinton and Nixon, and none of these boxes have been checked for this president.”

McConnell’s effort came a day after Trump, at a Cabinet meeting, complained that Democrats are much more unified than Republicans on impeachment.

“The two things they have: They’re vicious and they stick together,” he said. “They don’t have Mitt Romney in their midst. They don’t have people like that.”

The comment appeared to be in reaction to Sen. Mitt Romney’s (R-Utah) interview with “Axios on HBO” in which he expressed openness to voting to remove Trump from office.

Yet Republicans say Trump makes it harder on a daily basis for them to defend him.

On Tuesday, Trump compared his impeachment process to a “lynching,” language Senate Republicans did not want to defend. McConnell later told reporters that Trump’s use of the word was “unfortunate.”

“Given the history in our country, I would not compare this to a lynching,” he told reporters.

The GOP leader also distanced himself from Trump’s Oct. 3 claim that McConnell had expressed approval of the content of his controversial July 25 call to Ukrainian President Volodymyr Zelensky, which prompted the House to launch impeachment proceedings.

“He read my phone call with the president of Ukraine. Mitch McConnell, he said, ‘That was the most innocent phone call that I’ve read.’ I mean, give me a break,” Trump said.

McConnell said he did not recall the conversation.

“We have not had any conversations on this subject,” he said Tuesday.

Other Republicans have expressed discomfort with Trump’s conduct.

Sen. Ben Sasse (R-Neb.) said there was “terrible stuff” in the transcript of the call and warned, “We shouldn’t be having any American officeholder or any American candidate looking for foreign nations to come in and be involved in U.S. elections.”

Sen. Lisa Murkowski (R-Alaska) said last week it was wrong for the administration to hold up foreign aid to Ukraine.

Given those divisions, it may make sense for McConnell to highlight the process when it comes to Trump’s defense.

Blunt hammered home this point when he spoke to reporters Tuesday after the lunch.

“Last week, House Democrats decided again that they wouldn’t have a vote to officially begin an impeachment effort. So what do we have as a result of that? We have a process that’s going on in secret. We have selective leaking, without much material coming out,” he said.

“No rules are set out. President’s lawyers aren’t allowed to see the evidence or challenge evidence. Ranking members don’t have the ability to have subpoena power. What’s common about all of those things? In the past two impeachment efforts, all of those things have been exactly the opposite,” he added.