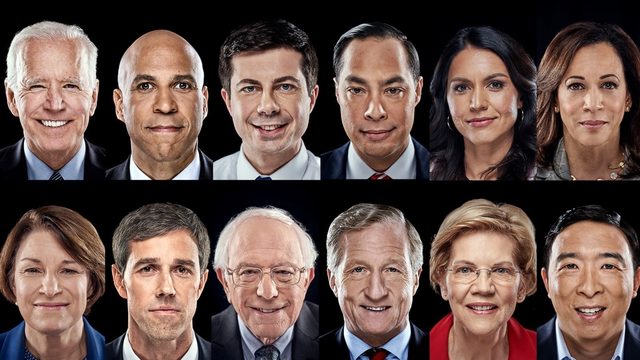 The October Democratic presidential-primary debate finally brought a genuine surprise, in that a pair of second-tier candidates who were in danger of being forgotten woke up, smelled the coffee, and brought their A-games: Amy Klobuchar and Pete Buttigieg. Considering how other second-tier candidates have turned in good performances in past months and seen little movement in the polls, this may not be a turning point in the race for either candidate. But in a way-too-long, often-boring debate that was stuck in the middle of an otherwise jam-packed news environment, Klobuchar and Buttigieg managed to stand out.

Where has this Klobuchar been all this campaign? She was lively, common-sense, and pugnacious, particularly with Warren. Most of the other candidates are now in the state where they’re terrified of telling any primary voters anything they don’t want to hear, so they promise all things to all people, and that none of it will require any sacrifices or offsets. The corny humor and jokes about nagging her daughter would probably work in a general-election battle in the Midwest. And when Klobuchar went after Warren, you would have thought the Massachusetts senator was a staffer who had fouled up Klobuchar’s lunch.

Buttigieg has always turned in well-prepared performances; if his previous nights had any problem, it was that they were smooth to the point of slickness; he still has that vibe of listening to a presentation from McKinsey Consulting. But if tonight was the pressure night for most of the second tier, with other candidates eager to promise the moon, Buttigieg seemed like the relaxed voice of reason. He also appears to be the lone candidate in these debates to tangle with Tulsi Gabbard, veteran against veteran on the issue of the Middle East and national security, and live to tell the tale. Every candidate tries to tell personal stories about what shaped their values, but Buttigieg does this better than most with his discussion of growing up in South Bend and serving in Afghanistan.

Tonight, most of the rest of the field took shots at Elizabeth Warren, a subtle shift of strategy that effectively declared she’s now the de facto front-runner. Warren seems convinced that she can get all the way to Election Day without saying that her health-care plan would require raising taxes on the middle class. Warren has probably one of the better defenses in response to the attacks — she largely ignores the criticism and just reiterates her argument more emphatically. You get the feeling that the other candidates get irritated when Warren makes it sound like she’s the only candidate willing to take the tough stands. “Even the billionaire isn’t standing up for billionaires,” Klobuchar noted to her, one of the night’s rare genuinely funny lines, referring to Tom Steyer.

Warren probably won’t lose much ground because of tonight, but this is the treatment she can expect from here on out.

Joe Biden had a relatively quiet night, but when you’re still arguably the front-runner, maybe that’s okay. He didn’t handle an early question about Hunter Biden well, focusing on his usual high dudgeon about President Trump criticizing his family and adding, “My son made a judgment. I’m proud of the judgment he made.” Hunter Biden earlier in the day said “In retrospect, look, I think it was poor judgment on my part.”

But Biden’s really lost a step since he departed the vice presidency. His answers often devolve into word salad – less a sign that he’s mentally losing it than the fact that you can see him jumping from one point to the next without finishing the first one: “No, look, demonizing wealth — what I talked about is how you get things done. And the way to get things done is take a look at the tax code right now. The idea — we have to start rewarding work, not just wealth. I would eliminate the capital gains tax — I would raise the capital gains tax to the highest rate, of 39.5 percent. I would double it, because guess what? Why in God’s name should someone who’s clipping coupons in the stock market make — in fact, pay a lower tax rate than someone who, in fact, is — like I said — the — a schoolteacher and a firefighter? It’s ridiculous. And they pay a lower tax.”

Everybody’s glad to see Bernie Sanders upright and seemingly well, and in fact he was pretty feisty and impassioned and . . . well, his usual loud self, only a few weeks after having a heart attack and surgery to implant a stent. I suppose that’s most of what he can do to reassure the public — although making his doctors more available to answer questions would be nice. But you wonder how many people at home were watching him and wondering if, God forbid, one day between now and Election Day he would need another emergency trip to a hospital.

Thanks to Saturday Night Live, now every time Kamala Harris uncorks or reuses a rehearsed line, like, “I have looked at more autopsy photos than I care to tell you, and I’m done,” I just picture Maya Rudolph turning to the camera and declaring: “Kamala. Sundays at 9 on TNT.” In the third hour, Harris bizarrely chose banning President Trump from Twitter as her hill to die on. The California senator tried to pick a fight with Warren over her disagreement. Warren had the better argument, declaring she was trying to get Trump out of the White House, not off of Twitter. Harris has a campaign that briefly entered the first tier, and then crashed and burned like Icarus. Tonight did not do anything to fix that.

Tulsi Gabbard asked Warren if she wanted to get all U.S. troops out of the Middle East, and Warren agreed. Before the debate was over, her campaign was walking that back, emphasizing that she didn’t mean to include non-combat bases in the United Arab Emirates, Qatar, Bahrain, presumably Kuwait. As Megan McArdle observed, “Gabbard is neatly exposing the contradiction between the desire of Democratic candidates to reassure their base they hate (and will end) Middle Eastern wars, and their desire to hammer Trump on pulling back in Syria.” At the end of the age question, Gabbard wanted to ask Warren if she felt she had the right experience to be commander in chief. CNN cut to commercial. While I disagree strongly with Gabbard in some key areas, she’s clear and crisp in her quasi-isolationist, quasi-supportive-of-dictators stances. She pokes at the softer parts of the Democratic foreign-policy consensus, and that makes her a valuable contributor in these debates.

Cory Booker is in an odd spot. He’s rarely had a bad moment on these debate stages, and he had another solid night tonight. He’s younger than the big three. He keeps trying to hit these notes of sunny optimism, and he keeps lamenting that other Democratic candidates have the audacity to try to debate with each other at a Democratic presidential primary debate. He’s never that bad, and he might match up better against Trump than the septuagenarians. (Wouldn’t hurt to boost African-American turnout in those key states, right?) Yet none of his debate performances seem to move his numbers.

Andrew Yang continues to be an interesting guy full of ideas who probably shouldn’t be president, but who would be a useful addition to some president’s council of economic advisors. Yang spends a lot of time thinking about issues that most politicians don’t worry about – automation, children staring at computer screens, protecting social-media users’ privacy and personal data. As someone observed on Twitter, sometimes he sounds like the only person stage who isn’t trying to BS you — one of the advantages of not spending his life in politics and running for office.

Beto O’Rourke had another bad night, and he has turned into the candidate that other candidates enjoy jabbing the most. Buttigieg had a stinging moment when he declared that he didn’t need any lessons about courage, political or otherwise, from O’Rourke. The former congressman believes that he can personalize every issue by describing someone he met on the trail who’s suffering some terrible problem; thus every answer from O’Rourke sounds the same: “Last week I met Eduardo, who’s a learning-disabled laid-off union pan flute player, with three kids, and his insurance company told him it wouldn’t cover his insulin because it wanted higher profits. This is a violation of our values as a country, and I’m running for president to make this country work for people like Eduardo.”

Julian Castro also seems to think that he can connect with the audience by connecting every issue to growing up poor and raised by a single mom in San Antonio. It’s the fifth debate, we’re past the introduction stage of the campaign.

Tom Steyer was a waste of space and time.